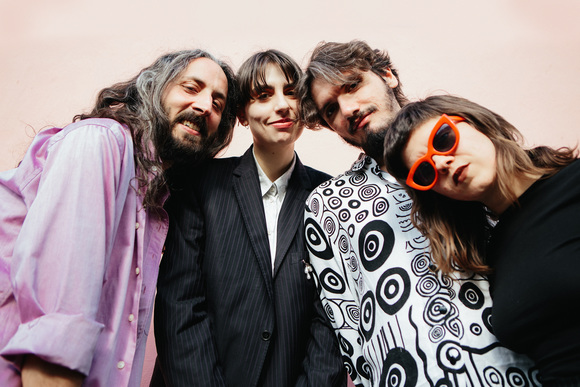 Zimbru are a tight-knit four piece of best friends playing a wild mix of raspy synthesizers, angular guitar riffs and lively percussion all topped off by stories of dancing, lost pets, queer love and nostalgia for never experienced past decades.

Most easily described as art-rock, the band comes from Cluj-Napoca, Romania & is composed of Teodora Retegan, Paul Bucovesan, Andrei Bobiș and Oana Pop.

Early 2019 marked the band’s stage debut and first release – a live recording of Dog Heaven performed at the Cirkular studio. In their article, 7 Rising Artists From Romania That You Need In Your Life, Gigwise describe Dog Heaven: “stylish, moody vocals, thought-provoking analog synth riffs, otherworldly textures and analog and electronic drums on this combine to an intoxicating whole.”

This release was closely followed by the band’s first ever single release - Divination – the first track off their debut EP. Divination has enjoyed remarkable success – it entered heavy rotation on national radio, it quickly amassed thousands of plays across streaming platforms and received great critical reception. Mystic Sons wrote: “Romanian outfit bring the same otherworldly sound as Anna Calvi to their newest electro pop swoon.”. The track was released alongside an absurdist, surrealist video directed by up & coming director Irina Alexiu.

The summer months following the release of Divination saw the band playing all of Romania’s major music festivals, to great acclaim. British magazine NME wrote before Zimbru’s show at Electric Castle, one of their biggest shows of the summer: “Mixing skittering electronic beats with powerful vocals and glittering production, this lot’s hometown show (they’re from Cluj-Napoca, which is just down the road from Electric Castle) is well worth catching.”

The band released their debut EP on November 8th via Cirkular. This record shares the same name with their second single, Little Creatures. (while also nodding to one of the band's big influences, The Talking Heads) The EP consists of four tracks - Divination, Little Creatures, Terejo and Dyo. The band started to get more international attention after their debut EP release. In a feature article, Europavox praised the band's charming debut: "Labeled as a breath of fresh air in the Eastern-European space, one cannot help but fall in love with Zimbru again and again.".

2020 put a halt on things, as it did for everyone else - the band postponed all shows with the exception of their online performance for WAVES VIENNA, where they debuted a new double single, The Ground / Slow Disco, released just a few weeks before the festival, at the end of August. The video for The Ground is the band’s first foray into a more do-it-yourself approach to video-making after the previous two singles, Divination and Little Creatures.

Throughout 2021 the band worked on a new EP, new videos & for a short time, made a long awaited return to the stage for the summer festivals. This year, the band has just released their new single Topaz, the first from their upcoming EP, alongside a costume-heavy video inspired by horror B movies & 80’s camp cinema.

With a finalist spot at the HEMI music awards & dates at many important festivals planned ahead, 2022 is shaping to be a breakthrough year for the band.