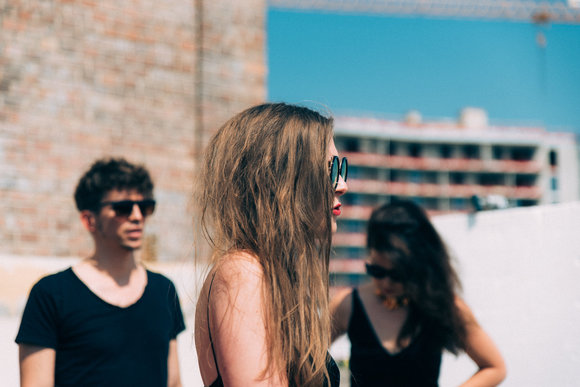 VIVIN create on KAOS a divergence of image and text: on the one hand they are good looking, produce catchy electro pop songs suitable for dancefloors, on the other hand they have a dark, thoughtful side that underlies their songs and also flashes through their sound from time to time.

VIVIN are Ada Joachimsthaler, Franziska Kleinschmidt and Hele Maurer, autodidacts and multi-instrumentalists. They mix electronic and acoustic sounds, beats and drums, Rhodes and piano, synth bass and bass guitar. They are influenced not only by bands like Tame Impala or Phoenix, but also by visual artists like Louis Vivin, from whom they borrowed their name and who, as a pioneer of surrealism, also finds a place in the band's self-image. –
Rolling Stone

“VIVIN enraptured us so much with their debut single Cryptic last summer that we promptly jumped on
the opportunity to premiere the prismatic glimmering, crisp sparkling indie pop song. They followed the
release up with their second single Skip The Beat, and now the Germany trio are back with Half Moon
Half Sun, which will be on their debut album Kaos, out May 10th via Seayou Records. VIVIN’s song is
a harbinger of hope and wonder, propelled by their dulcet and breathy dual vocals, doused in lavish
instrumentals, and fringed with oblique, climactic synths.” – I Heart Moosiq

On their debut album KAOS, VIVIN pack social criticism and dystopias into intoxicating electropop songs. Chaos as counterpart to the Greek term cosmos as (world-)order or universe describes the state of complete disorder. On the one hand, VIVIN understand the world around them as chaotic, unpredictable and also unjust. On the other hand, they themselves see in chaos - also musically - the possibility of developing something new. KAOS takes both into account: it is a socially critical album that tries to fathom the creativity of its makers. The 12 songs were written and recorded in rotation, each band member regularly using the instrument of another to develop new, spontaneous ideas and give space for the unplanned, the unexpected. In terms of content, VIVIN take on more serious themes, dissecting the interfaces between the self and the technologized, modern, chaotic world. For example, they treat new (social) media (Cryptic, High-maintenDance), future dystopias (Half Moon Half Sun), flight from reality (Chromatics) or flight in general (Skip The Beat), but there is also room for a classical love song (Sixteen).
VIVINs debut album KAOS was released on May 10th 2019. Now they are working on new songs one can enjoy at their live shows.