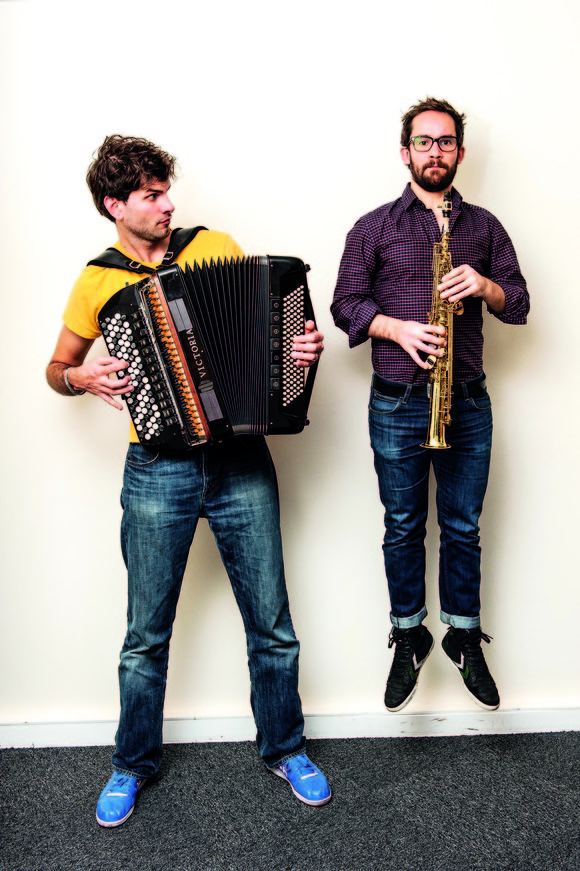 Vincent Peirani and Emile Parisien - two of the leading musician personalities of their generation in the French jazz scene - have now come together as a duo.

The former was even voted “2013 Artist of the Year” in France by the renowned Jazz Magazine and also received the prestigious “Prix Django Reinhardt”. Peirani is considered a great innovator of the accordion. When he plays, the instrument becomes a "treasure chest of excitement and wonders," as the German newspaper Welt am Sonntag fittingly puts it. His ACT debut “Thrill Box” in summer 2013 with Michael Wollny on the piano and Michel Benita on bass was received with storms of enthusiasm by critics and fans.
Peirani's congenial partner is his equal in every way: "Emile Parisien is the best news that European jazz has had for a long time," says the French newspaper Le Monde.
Alongside Jan Garbarek he is one of the outstanding soprano saxophone soloists of our time. Peirani and Parisien know each other very well already from their work together in the Daniel Humair Quartet. That they would form a duet was only a logical consequence for these kindred spirits. On "Belle Époque" these two re-chart the categories of jazz, because there is still new land to be discovered beyond the horizon: "Parisien's feverish soprano saxophone on the one hand and Peirani's orchestral accordion on the other, span contemporary music and jazz […] two obsessed
virtuosos inseparably connected by an unbreakable bond. […] and all together it breathes." (La Dépêche Du Midi).
"Belle Époque" is not only a masterpiece of chamber-music dialogue, it is also an homage to the great jazz soprano saxophonists, from Sidney Bechet (from whom there are two compositions on the album), to John Coltrane, who brought the neglected soprano sax back to life in jazz with the classic "My Favorite Things", through to Steve Lacy, one of the last grand masters of this instrument.