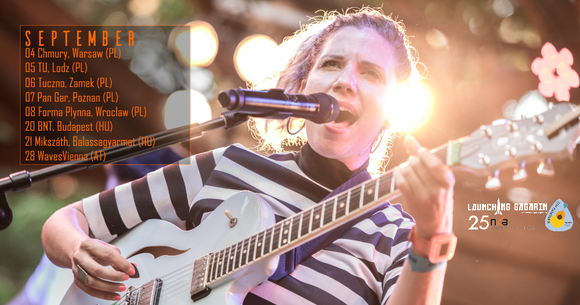 After Tauron Life festival in Poland and an extensive festival tour in Hungary, Vera toured in Asia in September with her band, Vera Jonas Experiment, and will tour in Europe in October and November 2018, releasing new songs all throughout the year.

The band performed three shows at Eurosonic 2017 and played at South Korea’s Zandari Festa. The first album, GAME was also released in Japan where they toured in the spring of 2015. The Experiment regularly plays in Austria, Germany, Belgium, Romania, Slovakia and the Netherlands and are frequent guests at Hungary’s top clubs and festivals like Sziget and VOLT.

Last March, Vera Jonas Experiment won the Indie/Alternative Album of the Year Award (Hungarian Grammy), while Vera received the prestigious Junior Songwriter Award of Artisjus, Hungary’s copyright agency.
The band was finalist in Hungary’s greatest talent show organized by Sziget Festival and the Hungarian National Television/Radio. She was chosen to participate in songwriting camps in Berlin and Budapest. She recorded a session for Sofar Sounds Sessions in Hamburg and a session for BalconyTV in Budapest. Vera sings the main theme of an original HBO series broadcast in 18 countries around the world, and a UPC advertisement. The band is constantly on tour in Hungary and abroad.

She graduated from the London Centre of Contemporary Music School in 2012. She was handpicked to the OneBeat program sponsored by the US Department of State, participated in a two-week workshop in Florida, and toured the Eastern Coast of the US.

After commuting between London and Budapest, playing live extensively with bands in both cities, she settled in Budapest and started to build her career from there. She formed Vera Jonas Experiment in 2011, released two LPs (GAME, Tiger Now!), a remix album (Remixed), a live EP (Tiger Live!) and an EP (WANTED). The song, What would they do?! was the original soundtrack of a Hungarian mainstream movie, while her featuring with highly-acclaimed Hungarian producer-songwriter Máriusz Fodor has reached the Top30 of Hungary’s top alternative music radio.