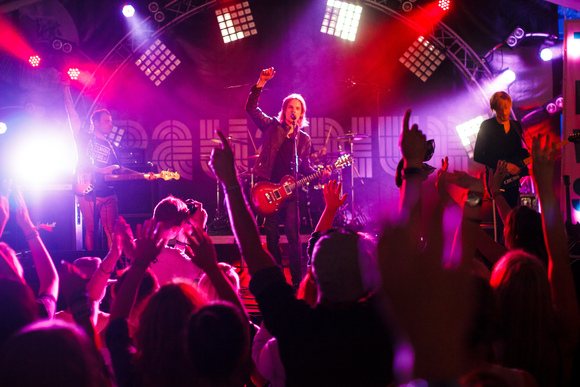 The Velvet Supernova is an alternative rock band based in Riga, Latvia.

Driven by strong musicianship and a broad range of influences, the band plays a timely mixture of rock music and modern electronica, often reminiscent of that expressive and somewhat melancholy 90’s alternative sound. While the band is keen on musical experimentation and might at times touch upon the heavier side of rock & roll just as well as some cryptic ambient soundscapes, their music stays framed in a classic rock aesthetic with plenty of sing-along, searing guitar leads and arena- ready choruses. What the band favours most and works purposely to preserve in the creative process is a listenable, rather traditional brand of songwriting, which has become one of the band’s defining features.

Formed in 2010 and making its’ public debut in 2011, The Velvet Supernova has since then performed regularly at some of the most prestigious clubs and festivals in the Baltic States. Along the way, the band has served as opening act for such bands as Funeral For A Friend or the legendary Slash feat. Myles Kennedy & The Conspirators, in which case the band played their first arena show to a crowd of 3,500 people. The band has released several radio singles, received a handful of music awards and nominations in Latvia, gained positive radio and media exposure, and established a notable fan base in Latvia and Lithuania. Several music journalists and critics have named The Velvet Supernova as one of the most promising live acts in the recent Baltic music scene. The band is currently recording for its’ debut album due out in the first quarters of 2015.