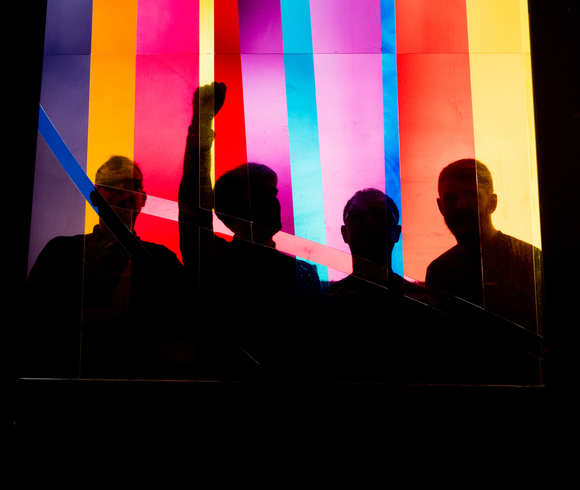 The Tea Street Band made many friends in their so far relatively short career.

Singles ‘Disco Lights’ and ‘Lost For Words’ made the playlist at XFM and were
chosen by Huw Stephens as BBC Intro Single of the week. These plaudits are
richly deserved for this four piece from Liverpool.
Recent shows have been ticket only and have caused twitter storms and sweaty
dancefloors. The last few years has seen the band touring with Inspiral Carpets,
Jimi Goodwin (Doves) and playing shows with The Charlatans. They have also
played the main stage at a host of British Festivals including V fest, Leeds &
Reading, latitude, Wickerman, Festival Number 6, Kendal Calling, Sundance Film
Festival Utah, after the release of their debut self-titled album in 2014 on
Liverpools, Baltic Records.
Their highly anticipated Second album has just been finished in liverpool’s Parr
Street Studios due for release on Modern Sky UK in Summer 2018.
The band are Timo Tierney, Nick Otaegui, Lee Smith and Dom Allen. Together
they have toured the world this year. Their shows in New York, Sydney,
Melbourne, Seoul and across Europe have seen them build a fanbase across the
globe. Having extensively toured the UK, building fans along the way from
Janice Long on Radio 2 to John Kennedy of XFM. They have picked up plays
along the way from Dave Monks, Jo Good, Clint Boon and Rob Da Bank. The Tea
Street Band cross over genres and have the spirit of the dancefloor, with their
songs are becoming anthems across the UK.
BBC Intro Track of The Week- Huw Stephens- BBC Radio 1
Janice Loves Track - Janice Long - BBC Radio 2
XFM Hot One- John Kennedy (XFM Xposure Show)
Shock of The New - Jo Good (XFM)
Guess Who Track - Llaina Bird (XFM)
My New Favourite Band- Clint Boon (XFM/Inspiral Carpets)
Track of the Week BBC Introducing- Dave Monks/ Tom Robinson (6 Music)
"The band make people feel good and forget about the stresses of everyday life, there's an edge of melancholy
in their "euphoric" sound."

Emily Brinnand , The Guardian
"Think of The Charlatans meeting The Chemical Brothers and lap up the finest cuppa that clubbers can come
across"
John Earls, Daily Star
"Think of 808 state having a meeting mid channel to hear some French electronic by Space Disco You need to
check these out soon - Come on were British we love a cuppa"