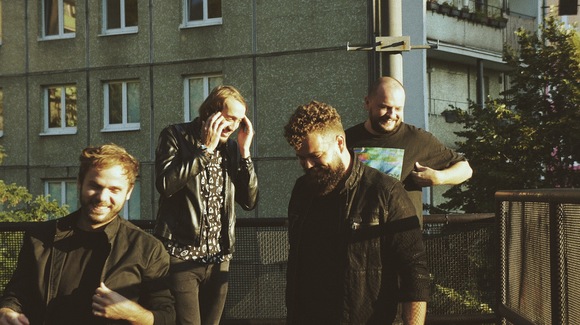 I love them. I need their music."
- Kevin Cole, KEXP

"Ethereal and gentle one minute, dark and chaotic the next; here’s a band to stand next to Red Sparrows, Explosions in the Sky and Mogwai in depth and extremity."
- Clash

Post-rock, shoegaze, prog-rock, experimental - a lot of labels have been put on The Ills' music. It is their live performances though where it all gets together and their musical skills and intense atmosphere meet with punk attitude and almost hardcore drive.

With two guitars, bass, drums and no vocals The Ills have played at various places from small pubs and cellars through art galleries and clubs to festivals such as Iceland Aiwaves, Eurosonic Noorderslag, Pohoda, MENT, Incubate, Colours of Ostrava, DUNK!, Waves Vienna, Waves Bratislava, Wilsonic, Creepy Teepee or Rock For People.

The Ills have played in Iceland, Denmark, Netherlands, Germany, Austria, Slovenia, Hungary, Poland, Croatia, Serbia, Macedonia, Czech Republic. They toured with Japanese band Tricot in March 2016 and have also shared stages with the likes of And So I Watch You From Afar, God Is An Astronaut, Russian Circles, Rosetta and many others.

Their latest album Ornamental or Mental has been praised and played by the likes of Kevin Cole of KEXP, Vic Galloway of BBC Radio Scotland, Klaus Fiehe of WDR 1 Live and Byte_FM. Moreover the band's music and live performances impressed media like Drowned In Sound, Clash, IQ Magazine and others.

Their track "4:17" was selected the Song of the Day on KEXP in March and both "4:17" and "Waltz On Mars" made it to the Music That Matters podcast as well on KEXP. Consequence of Sound even selected their concert into the list of 25 Most Exciting Performances At Iceland Airwaves 2016.

"Post-rock, experimental, shoegaze, prog-rock - they do it so well! An excellent band."
- Vic Galloway, BBC Radio

"The Ills - a cross between Mogwai’s soaring post-rock and Explosions In The Sky’s widescreen grandeur. Watching the band masterfully sail through their rich, sonic maelstrom is a deeply moving experience."
- Drowned In Sound

"…Slovakian quartet’s massive, heavy post-rock/math/shoegaze slabs more than rewarded (my) curiosity. Thanks to my stumbling and lucking into their instrumental swells, I felt like I was floating a few inches off the ground."
- Consequence of Sound, The 25 most exciting performances at Iceland Airwaves 2016