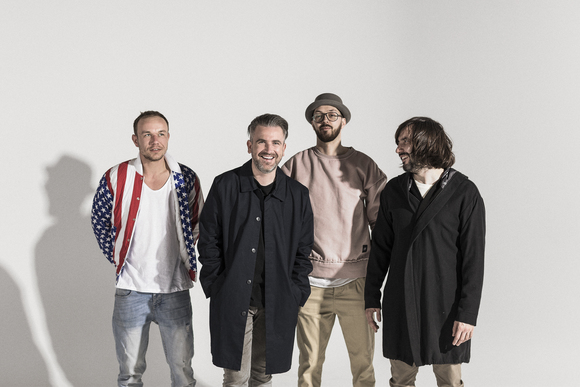 “We are like goddamn hurricane, nothing can stop us.” stated Talkshow about their latest single Hurricane, when band hailed from small and a bit boring eastern european Slovakia to world stages on SXSW in Austin, TX.


“We grew up in town with pretty nice castle and green parks. Also, the chemical factory has been built right next to it.
In short, thats how we are.
Its all about that contrasts in life” said Andreas and Peter, when asked about main thoughts of their critically well acclaim album “Kunst”.
Kunst resembles a photo album of a childhood which is not that long time ago, yet. Radiohead and trip-hop. You can hear Interpol pulsating in two tracks at least, but this is not a regular plunder, but more of a dignified tribute to the best albums, having its own distinctive arrangement. The basics of British rock that someone learnt not to copy but to take a lesson from and apply in their own works, which is not a sign of weakness, but a proof of modesty and significantly declared influences. Kasabian and The Libertines. Detached attitude and flair. Despite the fact, rarely oozing out, that the record was a low-cost thing and not everything is top-notch, Kunst is in fact a brilliantly non-conflicting, amusing record, exactly as similarly conceived albums should sound like. It is enjoyable, energizing, and asking question whether this genre is not hibernating yet, but at the same time, in one breath, answers that unless it can catch your attention, make your fingertips dance and compel you to remember the lyrics, it is clearly a part of what we call music today.
Talkshow are one of Slovakia's most persistent bands. Year after year, they release guitar-based music that can't be ignored and it's slowly but steadily paying off. Powerful riffs combined with quality production and unforgettable choruses - Talkshow are one of Slovakia's best bands. New album expect on spring 2020.