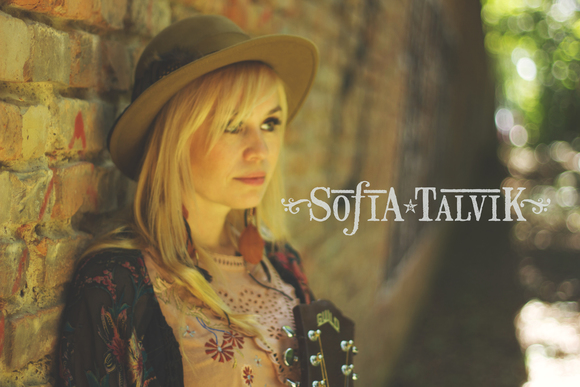 Unmistakably Nordic in flavor, Sofia Talvik somehow still conforms to American interpretations of her own original music, a North Sea siren blending sparkle and melancholy, creating a special niche of folk music that has been described as neo-folk.

She is a veteran performer with 6 full length albums as well as numerous EPs, singles and tours behind her.

"Paws of a Bear, finds Talvik taking a more Americana-flavored approach -- influenced by Jason Isbell, Valerie June and others” - Billboard.com

“This album is solid gold from start to finish” - Americana Highways

"Talvik develops is of a similar tapestry to Joni Mitchell, tapping into that same knack for soul-stirring clarity and resonance. Between, however, is something of a different nature. Open-air production sets the scene for an evocative and atmospheric release from the Swedish folk artist, coming in the form of an upcoming album, Paws of a Bear.” - PopMatters

"Talvik’s voice is a thing of thing of singular beauty.” - Goldmine Magazine

Growing up in Sweden her music has always had a special tint of her Scandinavian heritage, making her a favorite among music lovers, but her 16 month, and 37 state long tour, through the USA (in an old RV) has moved her new album ”Big Sky Country” closer to the Americana tradition. The adventure on the road spurred a lot of emotions, both those of triumph and joy, but also those of self doubt and defeat - all of which found their way into the songs. Living like a musical nomad, moving from place to place, slowly but steadily building her audience through her heartfelt and personal performances she got to experience the USA in a way few people do. The people she met opened their homes and hearts to her and some of them even made it into her songs.

On her nationwide tours she has now covered 45 states and gotten herself a new (old) small RV in the USA that is her ”home away from home”. She has been compared with giants like Joni Mitchell and Judy Collins, as well as fellow Swedes "First Aid Kit", but has her own raw quality, a down to earth sound that makes her brilliant songwriting skills shimmer even more. She doesn’t have to hide behind the sounds, her songs and performance speaks for themselves.

"Even though this young lady is from Sweden, I’d place her at the forefront of the American vanguard. One listen will tell you why and how." - PopDose

"A singer/songwriter who is able to evoke the essence of Laurel Canyon circa the ’60s." - NoDepression