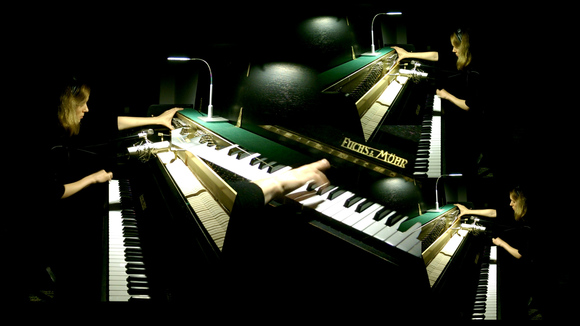 Sasha Barkovskaya is a Film Composer, Pianist, Singer, and Kelstone Player, based in Berlin.

She is classically trained, having graduated in piano and composition from the Academy of Music Minsk and University of Arts Berlin, and studied film music at the Film University Babelsberg.

Sasha's work as a film composer includes scores for documentaries and feature films such as Japanese-Taiwanese documentary 'Out There‘ (Festival international de cinéma de Marseille, 2016) and the German-Indian feature film ‚Dust‘ (Berlin International Film Festival 2019 ) amongst others. Sasha was selected as one of 2019's Berlinale Talents.

As a concert pianist she has performed alongside the Minsk Philharmonic Orchestra, the Saint-Petersburg Radio and TV Orchestra and Chamber Orchestra Potsdam.

Upcoming album releases 2021: CINEMATIC ORCHESTRA and a piano album FOR ALL MANKIND.