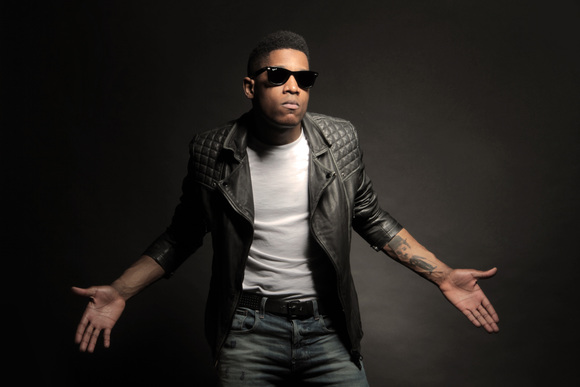 Having slowly exploded onto the Irish music scene in 2014, Irish singer-songwriter Andre Bangala better known by his stage name Rocstrong, has been steadily generating quite a buzz .

His first single ‘Go ‘Head’ is the feature song of the latest Irish Ladies football advert currently flooding TV and Radio stations around the country. This same hit song landed the lead spot for the soundtrack on the Coen Brothers latest Hollywood blockbuster “Hail Caesar”.’
The Congo-born, South Dublin artist began writing music at a young age; naturally this was in his blood as both his father and sister were musicians. Having been raised by a father and a sister who were both musicians, talent naturally ran deep in his blood. After spending years working discover his unique sound, he cites great musicians of the likes of Prince, James Brown, Elvis Presley, Michael Jackson and Pharrell williams as his main influences.

His first big break came when his song Go ‘Head, initially written for a song-writing competition for Budweiser, was picked up by multiple domestic and international radios stations after initially releasing the track on Soundcloud. Go ‘Head has been described as “a multi-faceted effervescent spark that is simply not present in much of Irish Music” (Nialler9).
The release of the first single was followed by his first ever live performance at the Mercantile as the State.ie artist of the Month (March 2014). Not long after this, Rocstrong capped off the year by earning the sought after title of the HotPress Big Break Artist of the year.

His second release ‘Limits’ received positive reviews and considerable radio plays across Ireland, building on the success of the first single. The track has been described as an “Infused song with a myriad of vibrant rhythm, syncopated beats and reggae influenced melody. ‘Limits’ grooves and swaggers with confident percussion and joyously up-tempo production” (TLMT). Limits has received much praise and is flourishing in the US with air play throughout Fox Sports, and part of the 2015/2016 NFL and MLB season. Rocstrong’s first headline show came on the back of the release, selling out the Iconic Whelan’s Live venue in November 2014.
In 2015, Rocstrong released his third single ‘Hold Yah’, which kept the momentum going among his dedicated following/followers. “A fun, up tempo single from a very promising artist, ‘Hold Yah’ is a perfect example of intermingling sounds and musical styles all coming together to create something new and refreshing” (TLMT).

Rocstrong plays live with a multi-talented and energetic four piece band made up of:
Donal Pywell, Bass & Synth
Keith O’Reilly, Keyboard & back-up vocals
Jason Merrigan, Guitar
Rob Kennedy, Drums.
All graduates of one of the most reputable music school in Ireland, the band members really help Rocstrong his distinct and unique sound to live audiences. They have performed at major Irish festivals including Forbidden Fruit, Castlepalooza and Knockanstockan throughout 2015, to name a few. Rocstrong tailors his sets to suit audiences; from small intimate performances and large audience festivals. He’s been praised for his versatile and energetic performances and is the act to watch out for on the Irish music scene.

It’s all just warming up as Rocstrong is currently preparing for the launch of his first EP titled ‘Show Off What You Got’ due for a summer release.