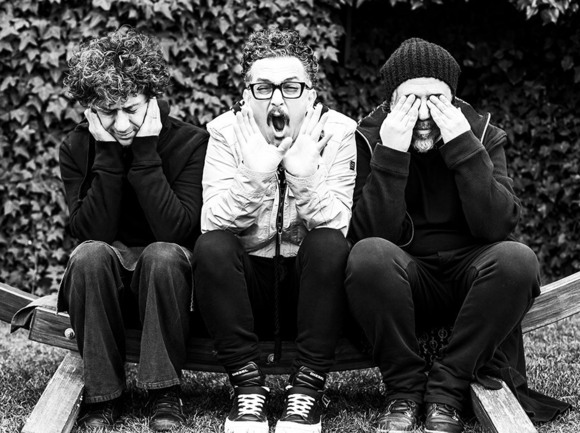 Founded by music producers/ jingle gurus Hakan Ozer and Omer Ahunbay, Istanbul based jam band Rebel Moves, is back to the scene with their 2014 project sessionOBsession.

Soul-riched vocals and melodies of Erol Cay/BABACAY meets with the hyped-up dance rhythms of the talented duo and Rebel Moves performs an influential jam session experience.

Playing a variety of genres with electronic patterns and grooves the band also welcomes guest musicians on stage and performs a unique musical experience. Rebel Moves share the stage with musicians and/or bands who feel the collective penchant for improvisation and the good vibe of the world. So far Ozkan Ugur, Bora Uzer, Sibel Gursoy, CEZA and Gevende performed live with the band for the launch of Rebel Moves v2014 , sessionOBsession.

Rebel Moves v2014
Founders of Jingle House, also known as ‘the jingle gurus’ Ömer Ahunbay and Hakan Özer released their debut album Inhouse Sessions as Rebel Moves, which was made up by the jam session recordings at Jingle house, in 2001.
In 2005 Rebel Moves became one of the leading band of the music scene in Istanbul with their international success radio hit ‘Sheep’ and the album “Are You Satisfied?” After touring both locally and internationally for 2 years the band gave a break and returned to the studio for more jam sessions.
Last year on February the band released the album“Kimileri Bir İleri” and announced their return to the scene with an album launch concert.

Rebel moves continued on studio jam sessions as well as live sessions at various venues and festivals. Rebel Moves launched their new website on March 2014 as sessionOBsession v2014. Sometimes with more electronic beats, sometimes very local and oriented, and sometimes with contributions guest musicians each session is another experience both for the band and the audience. sessionOBsession is the 2014 version of Rebel Moves in the mood of live jam session gigs and recordings.

For the fans and addictive session lovers you can watch the band live at last minute studio sessions on www.rebelmoves.com or at any live music venue, festivals and clubs.