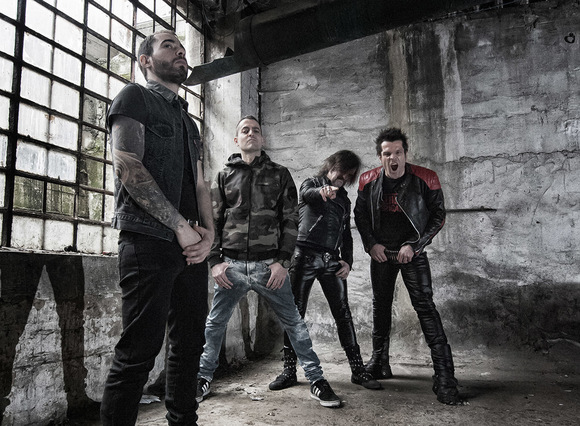 Rat-Zinger is a punk-rock band formed in Bilbao in 2009.

It evolved as a “band of bands” including well-established artists in the punk-rock genre. The band offers a unique punk flavor, an overwhelmingly sincere hardcore concept and a deep yet true rock spirit.

Bastard sons of Motörhead or The Exploited, they follow and execute their message of social hatred. Worshipers of the most screeching hardcore and stubborn survivors in a punk-rock and hardcore scene, they have been and still are creating a big buzz. As a biographical anecdote, just a few months after the band was formed, Rat-Zinger was the opening band for the mythical Misfits concert in Bilbao RockStar concert hall.

In case of name-related scandals, they already have everything planned to be quickly carried out. In music records, they fulfill their duty, but direct shows are their natural habitat. It is in the live scene that they prove their worth and the band’s name begins to move between the most seasoned punk-rock experts. Rat-zinger keeps working hard in place without looking back at the road left behind, making an urgent alchemy between hard rock, punk and hardcore.

Rat-zinger reinforces its crew with direct sound and lighting technicians, always trying to offer the audience high-quality and professional performances which also does justice to the potential of the band and their strong proposal. What’s more, the group shows special concern for the staging (the backdrop and props for a live show), always doing their best to give a bigger visual impact on stage. This was possible thanks to the accumulated experience of the group members, sharing scenarios with other groups and having assisted to hundreds of memorable concerts. It’s also a result of walking, sensing the streets, searching for … something. It’s a quest for anything other than misery, corruption or messing around. It all adds up for this powerful group of Bilbao, everything counts. Their incandescent songs do not hesitate to pull the trigger and shoot reflections that target the bedrocks of this society, songs that shed light on the emotional ripping which will nail you to the core if you let yourself be dragged.

Rat-zinger is not punk-rock, it is not hardcore, it is not hard rock, not metal ... It’s all that and it’s also a declaration of intent executed with power and force. The aim is to charge conventional beliefs or die in the process.