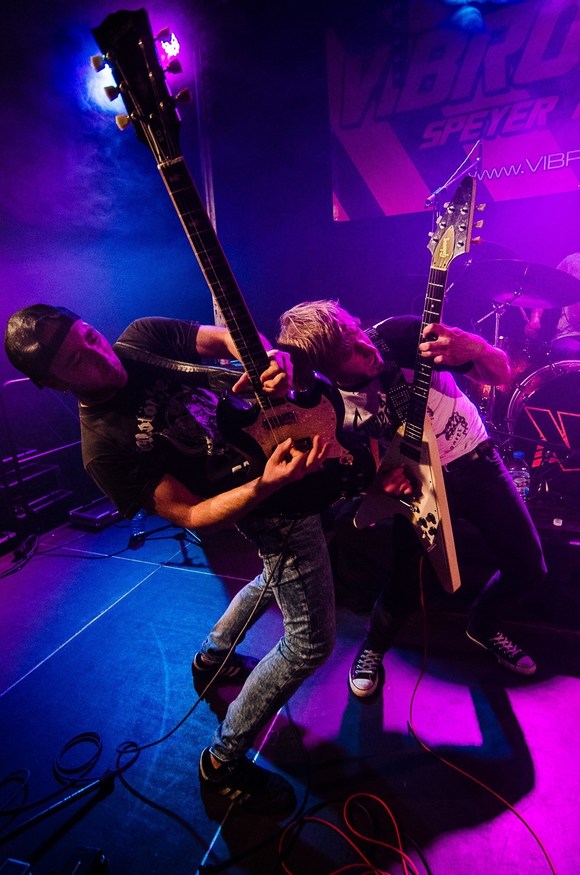 Founded in Germany, in 2004, by vocalist/guitarist Tom “Voltage” Krämer and bass player Luciano “Louis” Vanini, Nitrovolt – originally called “Hi Octane Rockers”, were a trio, completed by drummer Artur Hörtner. Shit happens, and musical differences cropped up, drummers came and went, until Micha firmly planted himself on the drum stool and the line-up stabilized.

Nitrovolt toured incessantly, and even more so after being signed to Weird World, a professional booking agency with offices in Cologne and Berlin. Their contagious sound (at the time labelled by the media as a cross between Motörhead and Zeke, the American hardcore punk band from Seattle), and powerful stage presence, rapidly spread like wildfire and earned them a fanatic fan following. Within the first year, without any label backing or distribution, they managed to sell thousands of homemade discs.

In 2009 Nitrovolt were booked to provide musical backing for a number of wrestling shows. The organizers suggested adding a fourth member to the band, and since this was an idea NitroVolt had been considering for a while anyway, and because the “wrestling-gig” paid well, they recruited Tim Vader, a second guitar player. Already a die-hard NitroVolt fan, Tim knew all of their songs, so he fitted right in. With the addition of “NitroTim” to the line-up, NitroVolt became one of the loudest and fastest bands in Europe, playing a unique blend of Speedrock and Punk.

In 2011 Nitrovolt signed to the IHP (I Hate People) Records label, and released their debut album “Rock ‘N’ Roll Commando”, but unfortunately the label soon folded and the owners – according to the band – relocated to destinations unknown. Still, “Rock ‘N’ Roll Commando” garnered rave reviews, Nitrovolt were now often favourably compared with such bands as the Texan outfit Speedealer, and even with the subtlety-free hard rocking Airbourne from Australia. They kept on touring, all over Germany, also venturing into the surrounding countries like the Benelux and France, often playing with the at times stylistically comparable Peter Pan Speedrock from the Netherlands. Along the long and rocky road Nitrovolt replaced drummer Micha with Smokey, when the former relocated to Berlin, while the band continued to operate from the Cologne area.

Hard work and perseverance ultimately paid off, and late 2012 Nitrovolt signed a new deal with Mausoleum Records for the worldwide release of their second album, subtly entitled “Pänzer”, sometime late May/ early May 2013.

Ladies and gentlemen, a word of warning: before listening to “Pänzer”, please fasten your seat belts (and we want to hear only one click!), and hold on for your life, cause NitroVolt is about to take you on a bone-shaking high-speed mega-horse-powered turbo-charged rollercoaster ride!

If you survive listening to the album – we then suggest go see them live on stage!