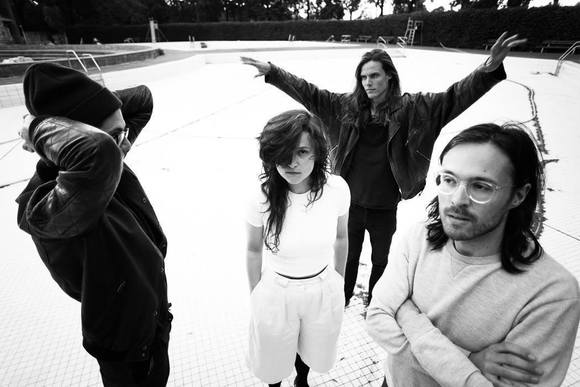 Named after the Hayao Miyazaki film Nausicaa of the Valley of the Wind, the multinational four piece band Nausica inhabits a music world as cinematic as its namesake.

Over the past few years they have steadily crafted an arresting and meditative sound, sitting at the cutting-edge of pop music.

Frontwoman Edita Karkoschka’s operatic lead vocals carrying an emotive quality reminiscent of PJ Harvey while the colorful guitar-lines of Tim Coehoorn, driven by Haim-like shifts, transform their songs into explosive powerhouses. Haunted by melancholia, - the lush and playful bass of Pim Walter combined with the electronic and acoustic beats of Jannis Knüpfer, - served straight up, frame an ever-present sea of hypnotizing, positive vibrations.

I feel it in my chest, fresh air - a vagabonds’ precious heir are not only words of their song Heidi, but according to their frontwoman, also describe the direction they are heading. Their music is sweet, with an edgy undertow. An pulsing energy that invokes a constant urge to dance.

It should come as no surprise that the members of Nausica are as different as their influences. With members hailing from The Netherlands and Germany, the band has managed to not only survive but thrive with multiple cultural influences.
After a warm response to their last international press releasing, 'The Molecules Fall Closer' in 2014, the band headed back to the studio to work on new songs. Made across Europe, production took place everywhere: in the train, on skype, in the bus, in the car.

Equally informative has been the quartet’s love for visual experience. An ongoing collaboration with fashion designer and illustrator Sarah Knüpfer, began with the styling for their upcoming video “Hey You” (release 17/04/17) and has extended into their stage performances.

Reflecting Nausica’s international character, the band has toured throughout Germany, Italy, Belgium and Switzerland. In the Netherlands the’ve established a loyal fanbase after a string of high profile Dutch events including Valkhof Festival, Noorderzon Festival, Mañana Mañana and Le Mini Who. They've also supported Son Lux at the sold out performance in the MC Theater in Amsterdam, and Dutch band De Kift in Arnhem, and made a live appearance on Germany's largest radio station, "1LIVE".

A string of tour dates are in the works, and will serve as an introduction to their upcoming full-length album - Nausica is taking their new musical output to a next level.