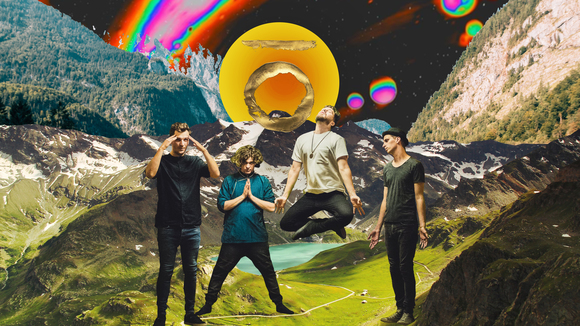 Mörk (H, D) Psychedelic Soul A hand-drawn circle with a line on top introducing a sound you wouldn’t expect from Hungary, that is too catchy to be Jazz, too diverse to be Pop, too groovy to be Indie, too trippy to be Funk, too deep to be party, yet too weird to be taken seriously.

Mörk’s explosive Soul and Funk based performance is a musical journey through a micro-universe of different styles, sounds, emotions, stories, characters and philosophical questions. Uncompromised self-expression, improvisation and audience participation are always to be expected!

The four band members became friends during their jazz studies and have quickly found their way into the heart of Budapest's underground music scene by playing in people's living rooms and unusual venues (e.g. a climbing hall, a Chinese teahouse, a kinder garden etc.) first before hitting the stages of prestigious clubs and festivals such as the A38 Ship, Akvárium Club, Budapest Park and Sziget.
Since then Mörk have played at numerous international showcase festivals including Eurosonic Noorderslag, Reeperbahn Festival, Mondo NYC, Waves Vienna, Tallinn Music Week and Spring Break Poznan and have toured both in Hungary and Germany, introducing their new double EP: The Death and Resurrection of Mōrk.
This first half of the band’s second album is a collection of five songs dark in tone that all examine painfully vulnerable sides of our experience: doubt, fear, loss, isolation, pain, illness, death and fear thereof. Facing these themes not only helped the band to heal and better understand themselves but also revealed unexpected beauty to be found in this uncomfortable corner of our psyche.
In spring 2019 Mörk returned to their more joyful and playful side releasing the second half of their second album “The Death and Resurrection of Mörk”. (Release date was: 21st of April)
The 2019 spring German release tour included shows at Berlin, Hamburg and an opening slot for Jamie Culllum in Leipzig organized by Wizard Promotions.
After a busy summer with headline shows at Sziget Festival (HU), Valley of Arts (HU), Bánki Tó Festival (HU) Edison Festival (PL) and Awake Festival (RO) Mörk is returning to REEPERBAHN Festival in Hamburg, then heading on to Iceland Airwaves in Reykjavik.