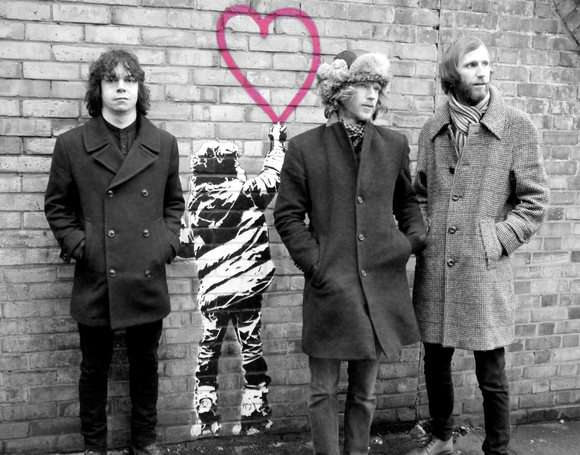 MIRACLE GLASS COMPANY are currently at the peak of powers.

Widely regarded as the best rock’n’roll band in the
UK right now they maximise the power of 3 with drums, bass and guitar, 3 lead vocals and 3 part harmonies
combining to make a sound that has to be heard to be believed. Fusing psychedelic rock’n’roll with pop sensibilities,
blistering musicianship and three unique voices, Vic Galloway (BBC 6 Music) described their show at XpoNorth as
‘the best gig I’ve seen in years’. On their debut album ‘MGC 1’ The List said the album ‘conjures up memories of the
Lennon/McCartney partnership at the peak of their powers’ and Scottish music guru Jim Gellatly named it as his
album of the year, describing it as ‘timeless, a future classic’.
Having established themselves as one of the most exciting live bands on the Scottish music scene in 2016
(Nominated for Best Live Act at SAMA Awards 2016 / headline show at T in the Park’s TBreak stage) MIRACLE GLASS
COMPANY topped it off with the release of their Owen Morris-produced debut album on VoxBox Records in October
2016. They have since been on a relentless touring schedule to promote the album, building a fiercely loyal fan-base
across the UK, including the likes of Kyle Falconer from The View who recently announced on Twitter after MGC
supported him on his debut solo show ‘you will not see a better 3 piece, scrap that, you won’t see a better band!!’
With further support gigs with both Kyle and The View to come before the year is through, 2017 has already seen
the band move to the headline slot in Glasgow, Brighton, Aberdeen, Stoke, Wrexham, Dunfermline and Stockport as
word spreads that MGC are the band to see. There have also been regular London headline shows and a residency in
their hometown of Edinburgh called ‘Late Night in the Big City’ which recently culminated in a wild sold-out finale at
The Voodoo Rooms, all caught on film! With radio play on BBC 6Music and extensive coverage on BBC Radio
Scotland for their infectious single ‘T.R.O.U.B.L.E.’ along with over 70k plays on Spotify and a spot on Spotify’s own
new music playlist, supporting the likes of Alabama 3 and Bruce Foxton, and playing at festivals including Eden,
Belladrum, XpoNorth, Carnival 56, Edinburgh Blues & Rock Festival and Outwith Festival, 2017 has been an incredible
year for the band. Work has now started on album number two 2018 looks likely to be their breakthrough year.