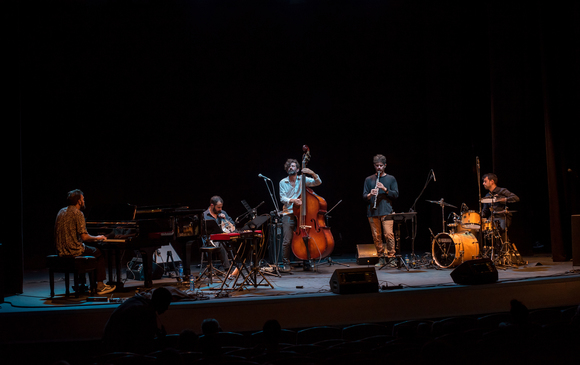 The double bass player Mihalis Kalkanis stands out among the representatives of the new generation of Greek jazz musicians.

He comes from a musical family and participates in the most important forms of the genre. He is a particularly daring and creative musician and composer, successfully experimenting and offering us unpredictable music. He dresses his grandmother’s traditional singing with electronic music and he does field recordings in immigrant religious ceremonies, giving us an amalgam of the world’s sounds in the album “World Echoes in Athens”.

His band was chosen as “the new music proposal” of the Athens Technopolis Jazz Festival 2018, while the following year he made a special appearance at the Summer Nostos Festival – SNFCC, with the leading Siberian multi-instrumentalist and composer Nadishan, as his guest. In the same year he appeared in other festivals in Greece and Cyprus, while In October his group was selected first among 300 nominations to appear at the Fira B Festival in Spain.

The highlight of the band’s course so far were the two performances in the Small Theater of Epidaurus (July 24 & 25) with two separate artists as guests, the Armenian oud master HaigYazdjian and avant-garde electric guitarist Giannis Anastasakis. Aiming at a new original and authentic sound they created together a musical environment of coexistence for jazz with ambient, traditional and world music with psychedelic and noisy perception, and source melody with electronica.