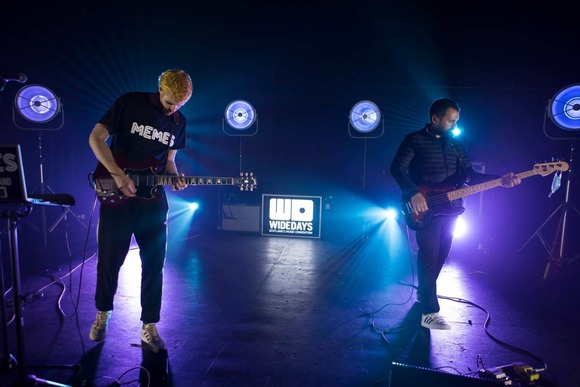 MEMES is a duo from Glasgow comprised of ME and ME, because we are selfish genes.

MEMES was immaculately conceived in February 2019, formed by cousins John and Paul. It was John and Paul’s second band together, but MEMES felt more like a band name than John Paul II.

Debut single ‘Blah Blah Blah’ caught the attention of Steve Lamacq and the track picked up multiple plays on Lamacq’s BBC 6 Music show. He liked it so much that he offered MEMES a live session. One and a half songs are not enough for a live session it would seem (we did ask), so a frantic writing and rehearsing week to get four tracks together was required instead. Subsequent releases have seen MEMES as ‘Artist of the Week’ in Scotland on Sunday, a mention in Clash magazine and radio play from Tom Robinson, Vic Galloway, Billy Sloan, Jim Gellatly and Nicola Meighan.

Throughout 2019, the MEMES tour bus (Mega Bus) made several trips to London to play shows (including supporting Niall Marr, son of Johnny) and back again to play home shows in Glasgow – including supporting The Dunts at a sold out SWG3 Galvanizers. MEMES were also one of only six Scottish acts to be one of the Wide Days showcase acts for 2020. There was a little-known pandemic (or something) in 2020, so the Wide Days showcase had to be played behind closed doors. This gave the band the chance to perform for the cameras at the stunning Leith Theatre in Edinburgh (…we mean Leith). This was the band’s first live show since lockdown, but it hopefully won’t be the last*…

MEMES latest single ‘SO WHAT’ is release 25 September 2020 and is taken from their forthcoming EP, to be release on Fierce Panda records in November.