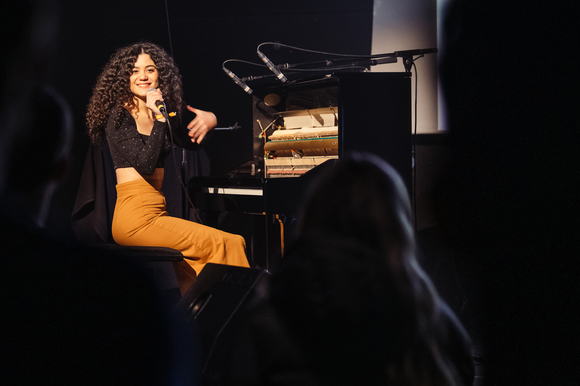 Marta Cascales Alimbau is a pianist and composer from Barcelona creating music with classical roots and a contemporary and minimalistic approach.

Her debut EP Light-House (2018) was followed by successful single releases with the boutique digital label Sonder House (New York) founded by the acclaimed musician and producer Kyle McEvoy. One of her pieces reached more than 1,5 Million streams on Spotify and she has just released her new solo piano album 'Anoche' (Sonder House, 2020).

She has been trained in composition and piano at the Royal Conservatoire of Antwerp and Taller de Músics Barcelona, as well as been resident artist at Varda Residency (San Francisco), Numeroventi (Florence), Almost Perfect (Tokyo). Marta has been selected as one of the five emerging professional musicians supported by Creative Europe of the European Union (Music Moves Europe - Slash Program) and chosen by Catalan Arts as one of the emerging music projects to be presented at Eurosonic 2021.

"Marta certainly bears a sense of gentleness and elegance. It is one of my favourite release this year” — Doug Thomas Writings.