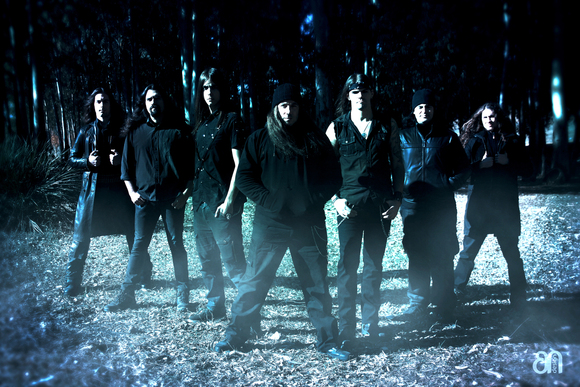 LAUMA KUUN is a newly formed band from Seville, but not young or inexperienced in the world of music, due to the extensive experience of all current members.

The project was initially called "Nando Herrera", nothing more. And that would be his name, but as not intended to be the main image formation, blurs authorship naming the band as LAUMA KUUN (Finnish, "herd of the Moon", in reference to one of the songs , "Marcado", trans. “Marked”), but framing the project in other projects under the caption "a Nando Herrera's Project" legend that accompany all projects created by him.

Being in a festival, Nando met Fali "Seth" Alonso, former bassist “Abdeel”, who offers to be the bassist for the band. Shortly after, and not without many problems, castings and trying to combine the search with all other projects, are also incorporated Beni Bermúdez (Eteddian) as keyboardist, Ignacio Domínguez (former guitarist "Rugido"), Hector Caballer (former guitarist in "Eslavon") and Enrique Herrera (former guitarist in "Dying").

The last member to enter the band, after an intense search for several months, is Boris Rodas, studio drummer in the Ecuadorian band “Dreamlore”, closing the circle of members.
The first album of the band, yet to come out, already has a considerable number of followers, despite not having the physical disk, they hear the songs that have been uploaded to social networks, as statistics show playlist of such networks, in addition to start being recognized with the band's own name in different media, mainly radio stations in Spain, Argentina, Chile, Mexico, Venezuela ...
This album tells of the experiences of the author, Nando Herrera, but using characters created by himself and others from mythology and popular folklore from around the world, accompanying each song with a text whose authorship is apparently character of each song, being able to find vampires, werewolves, ghosts, banshees, witches (only in social media for the moment) ...
All lyrics are devoid of personality of Nando Herrera, trying to get the listener can see reflected in his lyrics as if they were their own experiences from whom hear them, getting an album that could well be the story of many others.
In mid-February, KBMP International includes LAUMA KUUN in his "artist roster" (Lauma Kuun, InMemoriam ArEs) at the hands of Kimmy B Shade (Germany) with its partners Liquid Tree Records (Germany) and Miguel Johnson, signing with them and getting their orders shortly thereafter.