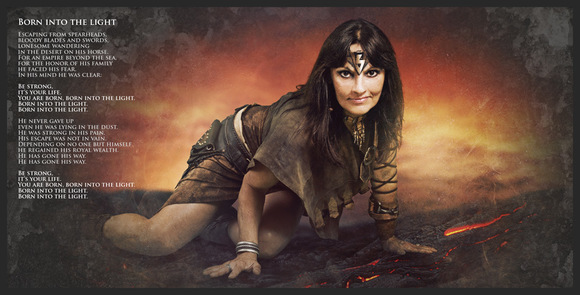 "SMOKIN 'HOT" LADY VOLCANO Do you love it explosive?

Then book Lady Volcano & The project9 Band. The singer and band leader has many years of stage experience as an oriental dancer. The encounter with a volcanologist inspired the artist to write a rock song. He spoke to her after a dance performance and compared her with a volcano.
"Lady Volcano" was born.

2012 she released her debut album "LADY VOLCANO" with some songs about motorcycles and the feeling of riding. She founded her own label and a rock band.

The progressive rock music album "FALCON'S DREAM" which she has dedicated to refugees. The music has oriental sound influences and was released in 2018. The music is composed by Oliver Palotai (Kamelot, Doro) and Roman Voronenko (Lady Volcano Band)

In 2019 she released her rock music album "RIDING FEVER" which she has dedicated to bikers and Harley Fans. With her new line-up "The project9 Band" she gave a concert at the biker location Strandbar 51.

During the corona crisis she wrote and released the song "WHATEVER IT TAKES". In September 2020 she released her 4th album "FIRE SKULL", which she has dedicated to women. In 2022 she produced the song "Welcome to Qatar" and shot in Egypt a video for the World Cup 2022 in Qatar.