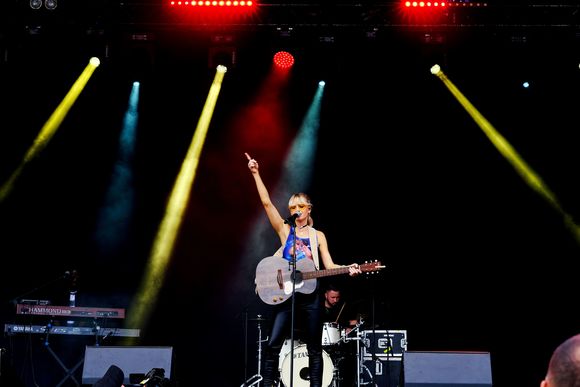 Being a Kerri Watt fan keeps you on your feet.

Best known for an unpredictable blend of pop-rock songs that have made her a festival staple, a favourite on BBC Radio 2 and seen her guest on multiple TV programmes aswell as host her own Americana radio show, the straight-talking Scot has also opened for Coldplay, collaborated with Embrace, had a chart-topping dance hit and starred alongside Marti Pellow in a musical.

Between releasing new music, over the past year, Kerri has performed a mix of solo and full band shows at Glastonbury Festival, Country2Country, British Summer Time (with Celine Dion), Kew The Music and Cambridge Folk Festival and performed at BBC Radio Scotland’s inaugural Singer/Songwriter Awards. She also supported a a number of legendary artists including Keith Urban (where she also joined him on stage to sing Carrie Underwood’s vocal parts from his hit ‘The Fighter’), Julio Iglesias at The Royal Albert Hall and Joe Jackson at The London Palladium.

Brought up in Glasgow by a dad who played for Celtic and a mum who ferried her to endless music, dance and drama classes, Kerri grew up certain she should be on stage. At 16, she won a scholarship to a music high school in California, by 18 she was on a West End stage and at 20, discovered that her first love was writing songs and set about becoming a solo singer/songwriter.

Kerri’s new music was recorded in Austin with Grammy Award-nominated producer Machine and was then signed to Cooking Vinyl Records shortly after they got wind of the music. There has been a major campaign building to support the release of this new sound that will surprise and delight fans old and new.