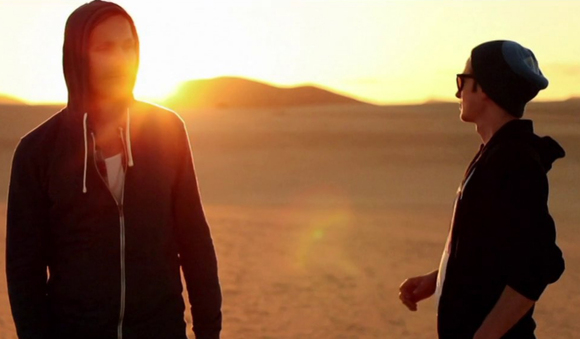 They still exist: those magical moments, catapulting a band from the literal nowhere into the spotlight.

JONAH is a great example of that. In the fall of 2014, their song ‘All We Are’ became the title track of Vodafone’s ‘Bucket List’ campaign, which aired nationwide across stations until the subsequent April. It was the first time the telecommunication giant chose a German act for his campaign, having previously solely integrated the music of international stars like Empire Of The Sun, Woodkid, Rag'n'Bone Man, Santigold or Capital Cities. This allowed JONAH, basically overnight, to evolve from longtime insider tip to The Next Big Thing! Meanwhile, JONAH accumulated over 30 million Spotify plays and over 2,5 million YouTube views.

JONAH are the singer-songwriters Angelo Mammone and Christian Steenken. Both grew up in the Northern German small town Brake and what started at the tender age of 8 years during a snowball fight in the school yard, has turned into a deep friendship and creative musical partnership. After touring with Ben Howard, Jimmy Eat World front man Jim Adkins and singer-songwriter Joris, they captured audiences nationwide and sold out venues during their own successful headliner tours in 2015, 2016 and 2017. JONAH also provided the soundtrack, as well as the title song ‘Deep Deep Blue’ for Matthias Starte’s directorial debut ‘Nirgendwo’, which was shown in cinemas all over the country in 2016.Among their most acclaimed supporters is Matthias Schweighöfer, who included ‘All We Are’ in the soundtrack of his film ‘A Jar Full Of Life’ and invited them to join his Germany tour in spring 2018.

From acoustic singer-songwriters to powerful Indie-Pop/Dream-Pop-duo that sounds like a whole band, JONAH’s music has a breathtaking and unique sound aesthetic you wouldn’t immediately associate with German groups. Atmospheric music reminiscent of The XX, London Grammar or Ben Howard, between dream and reality, day and night, shadow and light, created a captivating, immersive listening experience.

The impatiently anticipated debut album ‘Wicked Fever’ was created in the wild and romantic landscape of Fuerteventura, near volcanic rocks and the ocean. Broad soundscapes connect with electronic elements and the distinctive voice of Angelo Mammone that’s somewhere between warm neo soul influences and Scandinavian coolness, to form the record’s epic Indie Pop feel. JONAH and the eternal quest for the special moments – that is the driving force behind their creative work.