John Lewis and his Trio 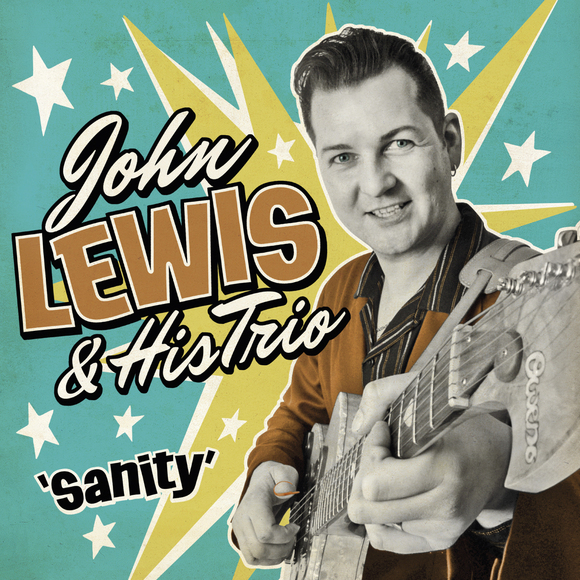 For gig date please go to www.therealjohnlewis,com The News As usual it’s been a busy year touring, while in between they’ve managed to fit in recording a new Album “Sanity” Due for release 1st August on Atomic Cowboy Records.

John’s long awaited Acoustic album featuring Imelda May on the title track “Waltz around the Kitchen” is also due for release this year in October watch this space.

All back up by Bill Duval & Woody’s hot rocking Rhythm section.

The Album has received a great response from DJ & Industry Professionals who heard a pre-release digital download. Hear some previews below

“Its Rock’n’Roll Jim but not as we know it”

Described by the Meltdown as “International rockabilly legend as frontman for the Rimshots, and solo an electrifying performer combining dazzling guitar with a glorious life-soaked voice which brings heart and depth to both classics and his own impressive songs. Be mesmerised by the missing link between Johnny B Goode and Johnny Cash”

and always a true professional”

“It’s a well know fact that the Welsh Valley are home to of the finest… Tom Jones, Shirley Bassey and of course John Lewis!

When I first heard John’s unique vocal delivery I thought it was incredible. I’ve heard it for Many years since an it really is exceptional. Judge for yourself”

”John Lewis a living legend in the Rocking scene is an icon in song writing and playing old and new Classic to bop, waltz, Jive and stomp too!”

“It’s almost unbelievable but true; one of the most successful and legendary Rockabilly band of all times will hit the stage at this years hangar rockin’ 2010! We fly these gentlemen’s asses to Switzerland where they will perform for the first time in more than 10 Years! We know you love the John Lewis Trio and Johnny Bach but the Rimshots are a goddamn musical hand grenade and this is exactly what you’ll get. and nothing less!”

“The Welshman with the invading voice has been quiet for awhile. Don’t worry – he’s back! As front man for the Rimshots and Johnny Bach he’s still all over the place and here we get another fine band from Mr Lewis – John Lewis Trio.

The new album is in the pipeline and music wise is drifting between the Rimshots and Johnny Bach. These 8 preview songs are pure rocking at its best and John shows again that he has managed it perfect to pack his musical talent, brilliant sense of humour and song writing in every song on this album. It doesn’t matter if its Hillbilly, Rockabilly, Country or Folk - he mix’s everything and creates tunes that are real ” ear catchers” and make you move around. Anyway I got this 8 track preview CD – I can say – I can’t wait for the whole album – just to “Waltz around the Kitchen” which is my favourite song on this preview”

In America they called it “soul”, In Wales we call it “hwyl”, singing with heart felt emotion. commitment and passion. Penarth’s very own Retro-esque Indie musician /singer/songwriter John Lewis has it in spades. John is one of the organisers and founder of the near legendary Penarth Pilot Sunday night jam session. His former band the Rimshots made a huge splash across Europe. John has recorded for labels in Holland, Japan, Australia, London (the oh so cool Vinyl Japan), and Germany – a made in Wales Hank Williams Tribute that won a prestigious British Music Award as album of the year. As well as backing and recording with many of his heroes, rock and cult legends on weekend festivals all over the globe. John also headlined many London gigs where stars came to watch the messianic eyed charismatic lead singer and chief songwriter in action.

Under his alter ego name of Johnny Bach, he has four CDs available, recorded along with Gretsch Twangmeister Darrel Higham, last seen touring with the Amazing Imelda May, which John has supported many a time solo

Haven’t seen him, where can I catch this local treasure before St Fagan’s grabs him? Weeeeeeeeell John Lewis tours Solo or with his Trio all over. He also can be seen doing the odd Johnny Bach and The Moonshine Boozers gig and Rimshots re-union. As well as session work and playing guitar with Pontchartrain, So no excuses