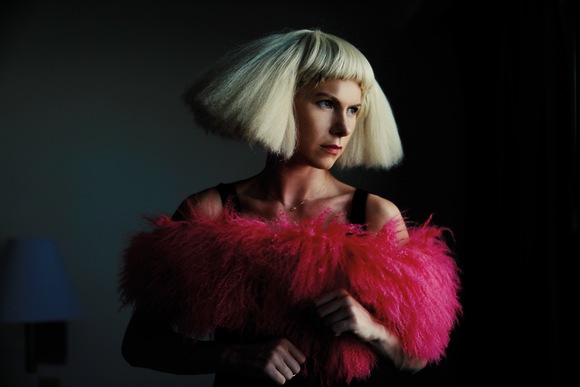 A high school classroom somewhere in Portugal, 1999. A blonde girl sitting in the back, apparently like all the teenagers in the rest of the class. But if we look carefully, we sense a look that at the same time reveals strangeness, some insecurity. The look of a stranger in a strange land. With a difference: this stranger seems to be unafraid and what is behind that look is summed up in an adjective: defiant.

Portugal, 2020. The teenager grew up and is currently in front of me, framed on a screen, as these strange days ask us. She smiles as she remembers who she was and confirms: “Yes, it was not easy when I first arrived in Portugal. It was a culture shock for anyone who had always lived in Russia so far and had to leave. I didn't know the language, nothing... Imagine a rebellious girl who suddenly has to deal with Cantigas de Amigo (Portuguese medeival popular poems and songs) and Os Maias (19th century Portuguese novel)!” She laughs. Here we go: Rebel! The air of challenge explained.

We will be back to this word: challenge.
For now, let us know better who is Ianina Khmelik and, for what really matters here, Ian. It is the latter that is preparing to present her first album - Raivera, a compound neologism that in Russian means “paradise” (rai) and “faith” (vera). The hopeful title can be deceiving by its apparent optimism when compared to what the nine songs on this disc tell. But at the same time, they do not deny it. Here is the first wonderful mystery. And there is more. But we’ll get there.
First, I ask how Ian is different from or complements Ianina Khmelik, a classical-trained violinist with a vast curriculum and currently playing at the Porto Casa da Música Symphony Orchestra. “Well, I try to distance myself from my work as a classical violinist, both in music and in the image I have on stage. Ian and Ianina are in fact the same person but in different artistic ways”. Anyone who thinks that Ianina's path is limited to the classical repertoire is wrong. An admirer of Stockhausen and contemporary music, Ianina had several collaborations in the pop and rock universe (GNR, The Gift, among others), is an actress and even participated in a study carried out by the University of Porto (Faculty of Engineering and Faculty of Dental Medicine) in the study project "Inside Music Machine", a show where it was possible to visualize, through thermographic equipment, the heating of the artist's muscles during the performance in real time. Ianina's universe is tailored to her interests and - here it is - challenges: several and without borders.

Now, Ian and Raivera.
After the first EP, released in 2018, the first album. To unite the nine songs, an epigraph by the German philosopher, Arthur Schopenhauer, who in this case is a declaration of intent: "It is difficult to find happiness within us but it is impossible to find it elsewhere". It is this inner pilgrimage that is noticeable in Raivera's songs, even in those where some blackness is felt, a contained anger. As I tell this to Ianina, she interrupts the smile for a moment: “Yes, it is likely. This may have to do with my life, with the fact that I ran away from a dictatorship….. And also with composers I love, Prokofiev or Shostakovich, who have a lot of anger camouflaged in a major tone”. But Raivera is far from being a reckoning record about anything. It is above all an exercise in freedom, something that Ian values and practices, both in the magnificent way she fuses electronics with captivating melodies, and in the attitude she transmits on stage, with a very strong image: “On stage I am alone and free, and I love it”.

“And I have a strong theatrical component, which I think works”. It works, absolutely!
Raivera's songs ask for this drama, they are narratives, sometimes small melancholic vignettes (Again), more festive (Boarding Now) or painful (the magnificent Vera, which closes the album more than perfectly). Nuno Gonçalves' production is complicit in this understanding and that is also why Raivera presents a rare musical and affective coherence. The live result is strong and contagious and a small tour in Mexico proved it: "It was very good, yes!", And here comes the smile. "I was in several cities and the reaction was fantastic! In one of them they even forbade me to go out at night for security reasons: I am blonde ... “, she laughs.
It’s time now to know Ian and Raivera. Faith and paradise, certainly. But challenge and originality, a contemporary pop without fear, accompanied by a performative dimension that will surprise anyone who watches it. Having already performed the first parts of a few The Gift concerts, Ian needs more time and space for her art. We need it too, believe me. I just want to emphasize another word that as a beautiful and invisible foundation sustains all this artistic personality, this more than original identity. It is the title of one of the songs and is written in German: Freiheit. Freedom, Ian. Freedom.