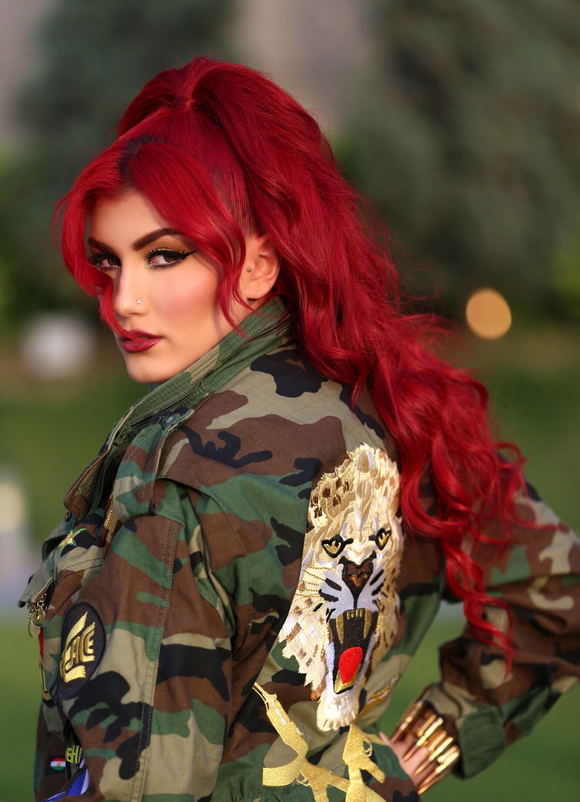 She is of Kurdish decent and born during the Persian Gulf War in Iran. Helly and her family escaped death from Saddam Hussein’s army, fleeing to Turkey for safety. Homeless and living under a bridge, they begged for money and spent nine months in a Turkey refugee camp. Fortunately, their application to become citizens of Finland was approved, allowing her and her family to be one of the first Kurdish immigrants to live there. Growing up in Finland was not easy for Helly. She was bullied for not looking like everyone else and being from a different culture. Unlike most Finnish children, all of her clothes and toys were either second hand or donated. This type of treatment forced Helly to find an outlet for which she would channel her anger and depression. She took an interest in singing in a neighborhood choir, playing the piano and taking drama classes allowing her to feel more accepted. Dancing became her primary focus and afforded her an opportunity to compete in European Dance Championships and soon signed a five year contract with Finland’s Nike Woman.

At the young age of 18, she felt ready to pursue her next step. She saved all her money as a waitress and dance teacher to purchase a plane ticket to Los Angeles. Helly came to LA believing in the “American Dream”, yet nothing came out as planned. She got robbed and blackmailed for all her savings. It was difficult for her to find the right people that would take her seriously. Helly continued to push on, but the life she had dreamed about was not shaping into the future she had hoped it would. Suddenly, reality hit her hard when she went three weeks without electricity and eating crackers to survive. This experience discouraged Helly and made her feel it was the wrong risk to take. Just before giving up and leaving America, she received a MySpace message from Grammy Nominated producer Los Da Mystro (worked with Beyonce, Rihanna, etc) requesting her to call him. Helly made the phone call and sang her heart out. In response to her telephone audition, strong determination and inspiring story he flew her out to New York the next day. They met and she signed her first development deal. She also worked with one of the most known songwriters in the world, Grammy Winning songwriter The-Dream (Michael Jackson, Beyonce, Justin Bieber, Britney Spears to name just few) Recently, she signed with G2 Music Group to execute a new project for her. Helly’s new album will be produced by Gawain “G2” Bracy II and has a world dance sound to it. Western music mixed with Middle Eastern touch.

Her first single “Risk It All” was a success and gained her right away international attention from around the world and made Helly Luv known for being a controversial artist who takes risks, she was named "Lion Girl" since she danced in the video with a real lion and showed her fearless dance moves while calling for an independent Kurdistan. With her great success from “Risk It All” Helly also received death threats from radical Islamic groups that wanted to stone her to death, also the Mullah spoke about her openly in mosques for being a bad influence and how her voice should be shut down. But that didn't stop her, “Risk it All” has been viewed more then 4 million times and also broke records as the most viewed music video in the region and making her the first Kurdish international pop star.

Helly Luv has also filmed two long movies with the famous Cannes winning film director Bahman Ghobadi. Starred in her first lead female role in a Kurdish art movie which had a world premiere in the 2014 Toronto International Film Festival. Her new movie will come out in the end of 2015.

June 2014, after ISIS attacked city of Shingal killing more then ten-thousand Kurdish Yezedis and right after the attacks in Kobane, Helly immediately collected volunteers and  delivered 150 tons of emergency items (food, water, blankets, mattresses, diapers, medicine etc.) to Kurdish Peshmerga fighters, Refuge camps and IDPs. She also worked with the UN delivering 125 thousand solar light systems to all camps in Kurdistan. Helly is known for her many humanitarian works and also shutting down the worlds second worst zoo in Erbil, Kurdistan.

Despite her hard humanitarian work Helly still felt the need of sending the desperate call for help around the world and sharing the message of Kurdistan, Peshmerga fighters and the 1.8 million refugees who escaped death from the barbaric terrorist group ISIS. She created the song “Revolution” in Los Angeles, CA spreading the message of peace, unity and justice.

Helly Luv worked on the “Revolution” music video for 3 months only 2.5km away from ISIS militants in a small village next to Mosul. Helly also shot a real tank across to the other side and her powerful message exploded around the world immediately and the video has been shared by hundreds of media outlets around the world. Helly has therefore been interviewed by the worlds biggest media outlets as (NBC, CNN, Fox News, Time Magazine, NY Post, Reuters, The Guardian, MTV, etc.) because of her global message and fearless attitude of fighting for peace, "My weapon is not a weapon, my weapon is my music and voice”.

The worlds dangerous terrorist Organization ISIS has now listed her as the top most wanted woman and given a price for her head. This doesn't stop or scare Helly and her calm response is, “It's a privilege to be targeted by one of the most dangerous terrorist groups in history, it proves that my message of “Revolution” is as powerful as their weapons, and if my day comes, I will fight and die with pride”.