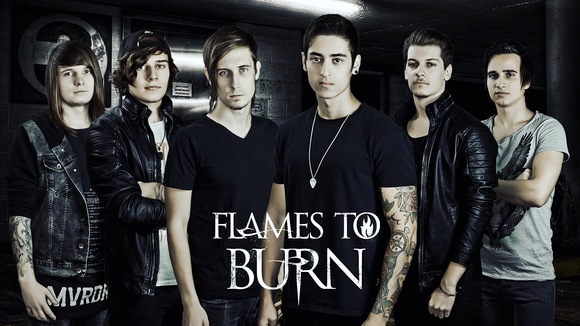 Flames To Burn is a post-hardcore and pop-metal band from Győr, Hungary, founded by Marcell Csik (vocalist) in 2013.

Flames To Burn is a metalcore band from Győr, Hungary, founded by Marcell Csik (clean vocals), Attila Horváth (drums), Martin Kovács (ex-guitarist) in 2013. Attila Sragner (screams, growls) and Marcell Szentgyörgyi (basses) joined to the band later. The songwriter is Marcell Csik. In the year of 2014 the band recorded the first EP with music video. Martin Kovács unfortunately had to leave the band, and Dániel Streer became the rhythmguitarist. From June of 2014 Roland Németh is the new rhythmguitarist of the band. From September of 2014 Roland leave the band, and Martin Kovács come back as guitarist. In 2016 the band started a new music style called pop-metal and alternative-rock with new members.

On 5th of May, 2014 'The Prediction' EP and the clip of 'Words of Wisdom' was released. Sound was recorded in Hangrafik Studio, mastered in NoSilence Studio. Videoclip was made by Noucta Design. In 2015 the first album was released. In 2016 relased new single called "Új Nap Vár" with hungarian lyrics.