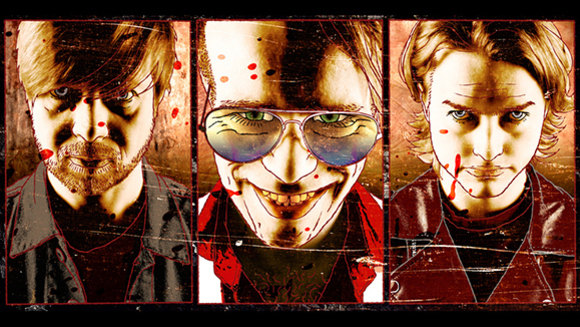 The last few years have seen the Dundee based three piece successfully rise from local underdogs to rock fan favourites appealing to all the losers, freaks, weirdos out there looking for proper meaty, ball hair raising rock.

Recently, they’ve found themselves the subject of Kerrang’s legendary Pandora strip twice, featured in the magazine and received stellar reviews. Rock Sound, Terrorizer, Q, Metal Hammer, Artrocker, The Skinny and Drowned in Sound are also amongst those who’ve highlighted the band’s humorous, brazen style. This flurry of praise led them to be nominated for a Scottish Alternative Music Award in 2013 (and again in 2014) and grace the stages of many a UK festival (T in the Park’s BBC Introducing Stage and T Break, Arctangent, Belladrum, Go North, Wickerman) and act as main support to Torche and the legendary NoMeansNo.

Despite their success, Fraser, Kevin and Mark are happy just to continue to create music that pleases them, and knowing there are people out there that ‘get’ them - “three chums with a shared enthusiasm for interesting and entertaining rock music,” as Fraser puts it. Scratch a little deeper though and they’d say that “Mark is the relentless careerist, Kevin is the eternal teenager and only Fraser knows where the bodies are buried.” Three incredibly talented odd bods from Dundee - what’s not to love?