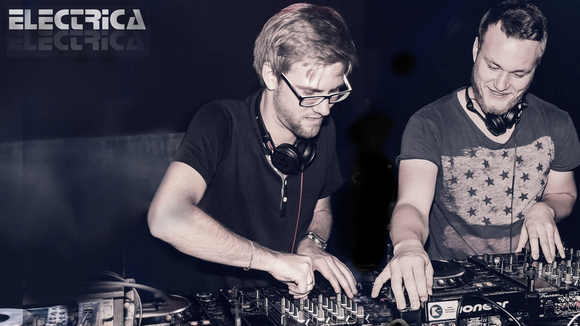 We are two guys from Lower Saxony (Germany) living in Hamburg right now.

We both started deejaying as young teenagers at 15. We met at a party and have kept in touch ever since. I taught Julius how to deejay and after a while we decided to launch our music project “Electrica”. That was four years ago, and a lot has changed since then.
We are loving and living for electronic dance music in all its genres. Our sets are powerful and elctrifiying: you’ll recognize well-known vocals as well as come in touch with all kinds of electronic music. Our musical style ranges from smooth and feel-good future and electro house to hardstyle. Having a party with us is a fantastic event that creates unforgettable memories for you.
We haven’t played at really big festivals yet, but that has never been our ultimate goal anyway (Well, we wouldn’t say no, if we were asked to ).
Being completely honest, we haven’t earned any money with our productions either. The sad but true fact is that we haven’t even made enough money to buy a crate of beer . But that all means nothing to us because we strongly believe that you can’t succeed if you only play for the money… it’s our passion to play in clubs and on bigger stages. We are lucky and deeply grateful to have experienced special moments that we wouldn’t have liked to miss out on! Feeling connected to the crowd is the biggest reward for our work!
Our first single directly entered the German DJ and Dance Charts. Our second ep “Raise Your Hands Up” was number one in the German Video Charts for weeks leaving behind celebrities, like Pitbull, Calvin Harris and many others. That was an amazing feeling! The track also did very well in the Festival, and Amazon and Itunes Download Charts. To this day, we have published more than 20 tracks, of which most reached the Top DJ/Dance Charts! And the best thing about it is that many of them can be downloaded for free on soundcloud.
Our newest official release is a remake of our biggest hit “Raise Your Hands Up” in a 2k18 version. It’s a Brazilian bass track which is a brand-new genre for Germany.
Btw: On top of that, we are working on a new tropical house track called “Tropix”! (Preview: https://soundcloud.com/electrica-official/electrica-tropix)
We are convinced that this song has got the potential to become a summer hit being played by any radio station! This track will be released for free in February since we’d like to thank our fans for their support during the last couple of years.
The next official release is also scheduled for February but will be completely different: It will be a hardstyle track. Why? We just felt like it.
Check out our music (and free downloads) on soundcloud: https://soundcloud.com/electrica-official