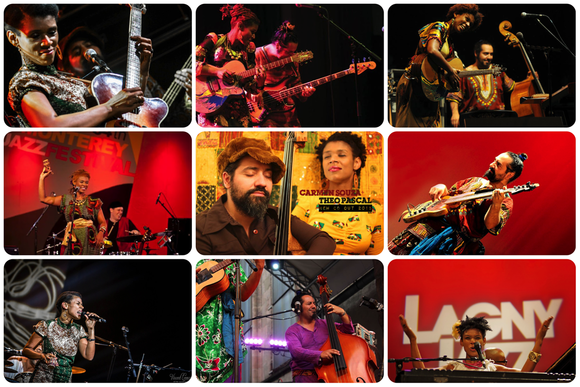 For the last 12 years Carmen Souza and Theo Pascal have developed a solid and successful own sound under ‘Carmen Souza’ House name leaded by Souza’s amazing vocal talent, Inquisitive and meaningful lyrics arranged over Pascal singular compositions.
A delicious recipe of African/Cape Verde roots wrapped around Jazz named by DOWNBEAT as "Recipe for Artistic success" and critical acclaimed by both Jazz and World Music Press and Audiences all over the world.

Souza has been named several times 'one of the most exciting talents in contemporary African Jazz' but Pascal was the one who discover her talent at 17 years Old and was always behind as mentor, composer and producer...composing 50% of all the released music by the 'Carmen Souza project’.

In terms of influences we can mention Charles Mingus, Monk, McCoy Tyner, Fela Kuti, Carlos Paredes, Hermeto Pascoal, Ornette Coleman, John Coltrane, etc...But what is important for CARMEN SOUZA+THEO PASCAL is creating your voice and identity as an artist and you can only do that by first listening to yourself....they also like to call their unique sound "Organic Jazz".

Epistola will be out in 2015 and Carmen and Theo will have new musicians on the band ready to
start touring the World and wowing old and new audiences!