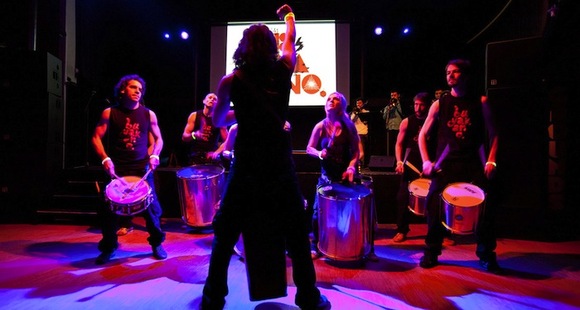 Buyakano is a massive collective of 15 musicians from more than ten different countries. With an estimate of about 1.973 secret ingredients, this innovative live act leaves the cautious drink-nibbling-fraction in the minority... In short: Buyakano has that certain drive to it.

In Spring 2010 ten friends decide to start the project that would later come to be known as Buyakano, the concept being simple yet intriguing : Playing Samba Percussion, but going beyond traditional Samba.

Originally starting out with common Samba-Reggae Rhythms from the North of Brazil the band‘s repertoire quickly changed by incorporating grooves from western popular music, fusing their own cultural heritages instead of adapting another. With members from all over continental Europe and the Americas they successfully intwined styles such as HipHop , Afro- Cuban, Dubstep or Jungle, always focussing on the massive, archaic and down-to-earth impact of Power-Percussion. Very handy: The ten also include two extraordinary singers!

After a year of shows filled with wild experimentation - sporting many different featured artists as well as different line-ups - Buyakano decides to expand it‘s team to 15, incorporating bass, three smashing trombones and a killer MC into their crew. From that point on Buyakano‘s three outstanding singers alternating on lead-vocals, fat basslines and the blazing horns all become trademarks of the band‘s rough sound, all the while blasting a massive groove-machine with breath-taking energy.

The latest since the release of their debut-EP Boom in 2012 it is clear that Buyakano has developed from a percussion group into a band. Since then they further continue working on their original compositions, added a guitar to the mix, have played at various festivals and currently prepare for the next album.