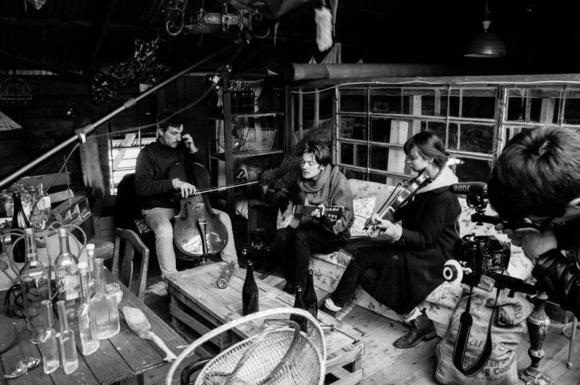 Front man to Brittsommar Sawyer Gebauer first arrived to the country side of Sweden in 2010 at a quint farm called Rosenhill.

While a walk through the forest it was asked, "What is the meaning of Brittsommar?" Johan replied, "The warmth before the cold."

Sawyer explains the project as, "A second chance. Bringing back the old before the new. Thieves. Angels. Prisoners and priests. The idea of the band has this pure energy around it that attracts people 'on the edge' in 'transition' or 'limbo'. It creates some kind of meaning. When there is no meaning to be had."
The first show was performed that October alongside the notorious Stefan Sundstrom in the dark barn with nothing but a candle chandelier to play with us through the night.

In the winter of 2010 Sawyer returned to the U.S. to recorded Brittsommar's first album "Day of Living Velvet" in an abandoned synagogue in my hometown of Madison, Wisconsin.

Returning to Stockholm June 2011, Brittsommar quickly got to work on releasing the new album and getting the project to the next step.

They made their media debut at the Peace and Love festival that year on Nöjsguiden.
That August, they started work on the second album "The Machine Stops" in Berlin meeting Chris Smith on cello, an ex german space agency employee and Gillad Reichenthal- one of the best drummers to come out of Tel Aviv today, escaping the arenas and world tours and starting a -new.

The first sneak peak was released last Nov. with the video "Sing Low"

which can be viewed here:

Since then, the project has reached an outstanding amount of press for the promotion of album "The Machine Stops" which was released in Stockholm April 4th. Getting acclaim from 34 different press spots in 15 different countries, including the debut of the video "Tell Me" which was premiered on SVT/PSL reaching over 25,000 views in one day on SVT TV.

The last video of the three part series "The Painter" was also nominated for the Berlin Music Video awards this year.

All videos were directed by New York film maker Leif Huron and the cover art was painted and designed by California based painter Michael McConnell.

They are currently in the threshold of starting their third album in L.A. and in the works of a Brittsommar acoustic album titled "House". A double album of 22 songs featuring acoustically chosen songs from "Day of Living Velvet" and "The Machine Stops" including new tracks and and unheard demos.