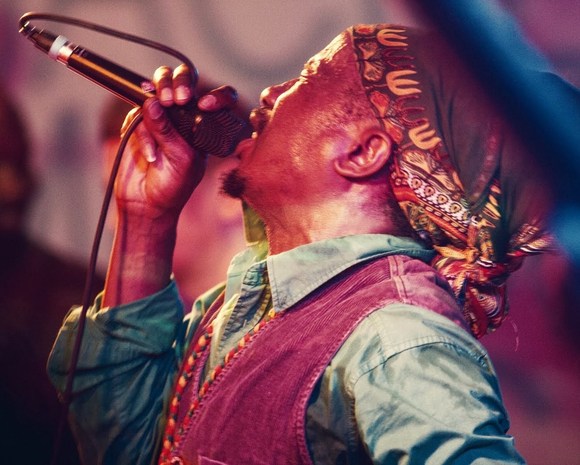 Atum Shekhem and The Shabaka Rootz Band is a Berlin based Band composed of 7 members (vocal, drums, trumpet, keys, 2 guitars and a bass), who is mostly known in Germany for its Reggae compositions.

The Leader, Atum Shekhem, starts his career in his hometown Rundu/Namibia, where he succefully works as musician and arts teacher. After a succesfull Album release in Namibia (Kora Nyara), varius appearances in national television and radios (ex. NBC) and cooperation with Cultural Institutions such as FNCC (Franco Namibian Cultural Center), he decides to move to Germany and start a new challange: bring his music on european stages and improve his knowledges.
Once in Berlin, Atum Shekhem a.k.a. Kashela Kashela, founds the Shabaka Rootz Band which includes some of the Berlin's finest Reggae musicians: Kpakpo Odametey on the Drums, Daniel Zabon on the Sax, Andy Keys on the Keys. His many performances on some of the most representatives Reggae and World Music stages such as Reggae Jam Festival, ReggaeInBerlin Festival, YAAM, Werkstatt der Kulturen, Karneval der Kulturen, and next to Timeless Sound, Barney Millah Sound and Bass Station Sound, makes him soon well known in the local Music scene.
In November 2013 the Shabaka Scientists are invited to play at the first Sacred Music and Dance Festival of Berlin, held by the Werkstatt der Kulturen: a huge success! February 2014 Black History Month at WdK: again a huge success.
In June 2014 Atum Shekhem and his band take part for the first time to the Afrika Fest Freudenstadt, once back in Berlin, Atum is invited to play next to the international artists such as Jah9, Perfect Giddimani and Tanya Stephens, on the main stage of the 8 Jahren Reggae in Berlin Festival, at the new YAAM, 8 Jahren ReggaInBerlin.de Festival@YAAM and Timeless Thursdays are only some of the latest successes of Atum Shekhem&TSRB.
Believing in music as one of the most powerful means of communication, Atum Shekhem & the Shabaka Rootz band's concerts can be described as a moment of high level entertainment as well as a moment dedicated to upliftment and positive vibes for every single unique person to enjoy.
Kambembe Music, Roots Reggae,Soukous,Dancehall and more. The band is planning a promotional tour in 2015. In the meanwhile the mixing of the Demo CD is going on and the Shabaka are ready for more.
Watch out fi Dem!