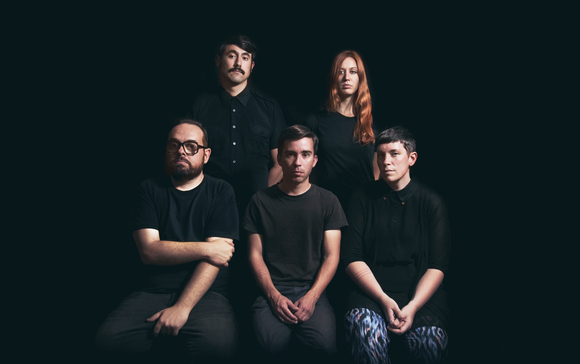 Anímic have published five albums, collaborated and toured with the great Will Johnson (Centromatic) and have opened up concerts for bands like Portishead, These New Puritans, Clem Snide or Megafaun.

They have played at festivals like Sónar or Primavera Sound and their last album ‘Hannibal’ positioned them at the top of nearly every the list, including the legendary magazine Rockdelux who praised not just the album but also their live act.

“ … it's always easy with Anímic, no one can resist Louise Sansoms voice and the way she hits those drums. Their live act is hope in the darkness and their latest album Hannibal is definitely one of the albums of the year…”
Mondosonoro. Octubre 2013 (MMVV)

“Animic caused a beautiful uneasiness amongst the viewers with their songs from their new album Hannibal...” Donat Putx, La Vanguardia. Septiembre 2013 (MMVV)

“Animic have made an album that hurts and thrills at the same time …”
Mondosonoro. Septiembre 2013

“Sharp, warlike songs that are elegantly desolating…If this album had been released by XL, half of Pitchfork would be doing a wave.”
Rockdelux. Octubre 2013

Anímic was born in 2003 with their first EP "Ice.cream van". By the end of 2004 they decide to record their first album together "Niu-Núvol" (Pae), produced, mixed and mastered by the well known musician and producer Jordi Matas, the album recorded in his studio "Les Tubes" in Esparreguera and finally mixed in "Estudio 44.1" in Gerona with the help of Toni Paris. This album would take them to win the "premio Joventud" to the the band with the best future of 2005, while all this happened anímic carried on with small concerts in bars and venues in Catalunya, in festivals like "Poparb" and "Obert en canal" and they even recorded two unedited albums, "Campament" (experiments recorded in a bungalow at a camping site) and "Plou massa poc"(Les PetitesCoses Records/Error!lo-fi) that you can download for free at Error!lo-fi net label’s website. By the end of this year they take a step forward and all go to live together in the small village of Bruc, by the foot of the mountain of Montserrat, so they can dedicate their time to their music, not just songs but to creating soundtracks for short films like "Actuem sense embuts" by Asmatik or "La percepción sensorial" by the director Juanjo Montañes.

In 2006 and completely by surprise they become finalists of "En Potència" a small contest on Catalunya Radio to choose the best band of the year, they make songs for the theatre company Sabotagem and their play "The emperors dress" and they record the song "My father" for a short film dedicated to Kafka.

After an intense year of work they decide to start their next album "Hau o Hïu" recorded and produced completely at their home, with a Tascam 2488, yet again they are helped by Jordi Matas in the mixes and the master and they choose this time to edit with a Creative Common license. Just as they finish their new album they are called to Bilbao to participate in the famous music contest "Villa de Bilbao" where they finally meet the man who would become their new drummer, friend and room mate Roger Palacín.

During the summer of 2007 they take part in a performance with dance and live music called Kafka, they record an EP called Glory and Love and by the end of the year record a small album called Christmas songs (Les PetitesCoses Records/error!lo-fi), with popular Christmas carols and a couple of their own. Seeing the reaction of their listeners they decide to start a small tour during the month of December taking their Christmas spirit around Catalunya.

Their album Hau o Hïu has given them interviews and very good reviews in papers and magazines like "La Vanguardia", "El Periodico", "Rockdelux" or "Mondo Sonoro", they have managed to be listened to on radio channels like IcatFM, Radio 1, Radio3, Rac1 and have had numerous appearances on programs like Loops, Silenci? De prop and have been run up acts to major artists like the American Damien Jurado, the Icelandic Seabear or the famous Catalán Joan Miquel Oliver.

On the 6th of January 2008 they win the "Certamen pop-rock de San Adrian" becoming the first pop-folk band to win in all of its 13 years of existence. Two months later they win the Carles Sabater Prize for best song of the year, meanwhile all of this was happening they managed to write songs for a TV series called ‘Vent Maleït’, the TV channel liked their work so much that they asked them to make 3 series of a new program called “L’ou de closca verda” with a total of 39 original songs.

Their album “Himalaya”, recorded in February 2009 with the well known music producer Ricky Falkner (Standstill, Egon Soda…) and sound technician Jordi Mora (Ojos de Brujo, Enrique Bunbury), was mentioned in almost every magazine and paper in Spain, all with incredible reviews by the best critics and was in all of the national best album list of the year. At the end of 2009 they published a Christmas album with another artist (El Petit de Cal Eril) and he’s label Bankrobber, a limited edition that was completely sold out that same Christmas and was officially presented at the Auditori de Barcelona and the program “Anima” on channel 33.

During 2010 they played concerts with bands like MegaFaun and Clem Snide. They also did a very special project with the north American artist Will Johnson (Centromatic), mixing their own songs with Johnsons songs to offer a small tour round Spain, in the 3 weeks that they worked together a documentary was filmed by the director Raúl Cuevas (Nanouk Porduccions) that was later played in cinemas within the famous documentary festival “Inedit 2010” and was later nominated in the “Festival Mar de Plata 2011” in Argentina.

In 2011 they release “Hannah”(BCore/autoeditado, 2011) finally proving them as one of the most interesting and original bands in Spain, with the album being on many ‘best of the year lists’, including Rockdelux (Best album at Nº 8 and best live concert at Nº 3). The singer Louise is then told she would have to have a delicate back operation and the band cancel the rest of their shows for the year, but not before managing to play on the Pitchfork stage at the prestigious Primavera Sound 2012 and being chosen personally by Portishead to open their only concert in Spain. They have a final and successful tour through Chile before the operation and decide to use the time Louise needs to recover to prepare their new album Hannibal (BCore Disc 2013).

In 2013, with Louise totally recovered, they are suddenly left by their drummer Roger Palacín and have to reorganize the band. This setback turns into something positive when the band takes a sudden change in concept and realize they can open new and exciting doors. Louise takes charge of the drums and the band record the darkest and most energetic album to the day: HANNIBAL, presented with great success at the MMVV and BAM in September and that helped them be chosen to open for These New Puritans this past November.

The album reaches top of the Spanish 2013 lists and hit the fifth position on JitParade, a “list of lists” of all the most influent press in Spain. They have been invited to play at festivals like SXSW (Austin, USA), Focus Wales (Wrexham, UK) or Liverpool SoundCity (Liverpool, UK) and others, helping them to at last see a world beyond their homeland. The press say this album is a new start for Anímic…and Anímic could not agree more.