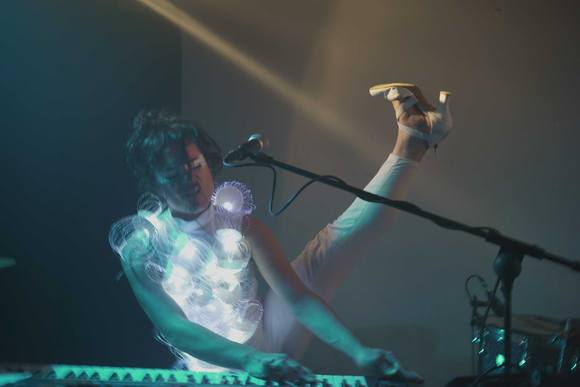 Anatopia is a concept band A freak show A lucid day dream of a nerd A comedy about the adventures of two wired souls in the wilderness of the www.

its 100% hand made high tech pop, committed to produce machine like precision with super human bodies.

Anatopia is a word that describes the state of things or people, when they are not in their proper place.
Anatopia, the band is made of Henrietta Morgenstern, an Israeli in exile, and Klaus Plötzlich, a German in disorder.

Anatopia plays electronic pop without the use of computers- only with the moves their bodies can produce in real time.

Klaus Plözlisch plays a self made drum kit with his feet, and plays synth or guitar at the same time,
Henrietta Morgenstern plays synth, lead vocals, and bang on a crash cymbal as hard as she can.
What you get is a concert performance in which the crowd tends to dance, laugh and get surprised.

Anatopia performed since 2010 in festivals and venues in Germany, Japan, The Netherlands, Belgium, Israel, Denmark, France and Switzerland. Their first EP was released in 2011 and their first full length album is about to come to the world in February 2015.