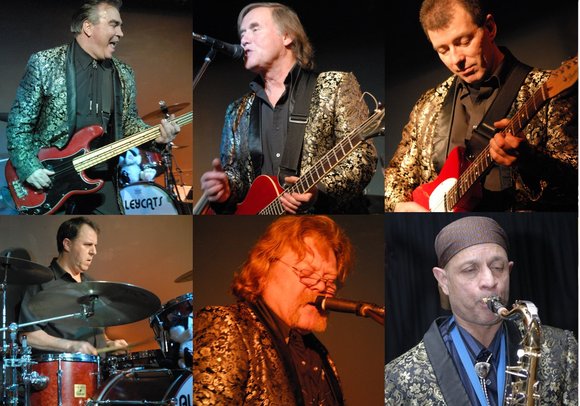 The Alleycats are a full-on six-piece band that covers the whole range of 50's style rock'n'roll, including Rockabilly, Jive and Doo-Wop.

They are based in SE London, but travel all over to wherever someone needs a good band to dance to ! Because getting people dancing is their mission in life ! They look good, sound great and have more experience on the rock'n'roll scene than most !

The Alleycats are a 50's style rock'n'roll band based in SE London. They were formed in 1998, but have had quite a few changes since then. Only surviving member of the original four piece line-up, Drew Spikes, seems to have accumulated a motley collection of old mates from previous bands to make up the current six piece line-up.

Johnny, Drew & Butch all used to be in Yakety Yak together back through the 70's, whilst Drew & Mick used to be in Sonny King & the Sons Of Swing in the early 80's. Paul Kent on drums joined just over two years ago, but has become an integral part of the band. The band's last regular piano player, Rusty Lupton, was made an offer he couldn't refuse by the Kingcats several years ago, but he has been popping back for 'guest' appearances and to complete the band's latest CD, 'Up To Scratch !' Otherwise the Alleycats draw upon a small selection of the cream of rock'n'roll pianists, most notably Claire Hamlin or Jamie Rowan, with Dan Edwards (ex Alleycat and now with Big Boy Bloater) occasionally dropping back in.