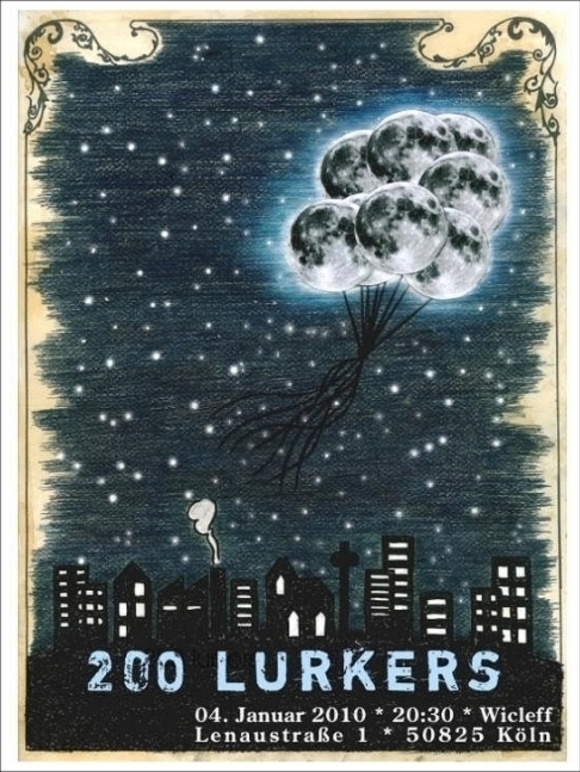 The 200 lurkers are a band-project based in Cologne, Germany that has won a small but dedicated following all over the world in the past years.

Their guitar-based singer/songwriter tunes have a wistful, melancholy feel, but are buoyed by an innate sense of whimsicality that is reflected in the delicate instrumentation and the interplay of the singers' voices. Charmingly off-kilter melodies carry along lyrics which often depict a duality of the ordinary miraculousness of life wrapping around a pearl of bitterness and loss.

Musically, the 200 lurkers straddle several genres from twee pop to new folk to alt-country, though there are as many differences as similarities between these styles and the 200 lurkers. The band is fond of incorporating unconventional musical instruments or technologies
(such as water glasses, children's toys, or archaic drum machines), and their principal aim is to share the joy of writing, the delight of practicing and the passion of performing songs.

An interview/performance was aired on TV and director Jeffrey Wolfshohl chose the music of 200 lurkers for the soundtrack of his 2008 short film My Martyrdom In Every Case. For the press the 200 lurkers are a “worldwide local insider tip” (Ultimo) whose “finely-wrought sound is unique in the local pop-scene” (Neue Westfälische).