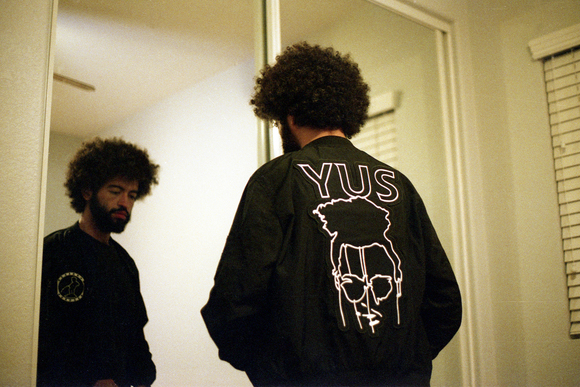 YUS is the sound of American singer-composer Youceff Yunque Kabal.

Drawing from an eclectic set of influences, YUS creates emotive soundscapes that strike listeners with their depth and impactful lyrics.

Youceff Kabal was born in Brussels, Belgium, and moved to Phoenix, Arizona with his family in September 2004. After moving to the US, Youceff began to make mix CDs with his brother to listen to on the way to school. The CDs were heavily hip hop oriented, and his selections most notably featured Kanye West who remains a great influence. After seeing an Adidas commercial during the 2006 World Cup featuring the music of rjd2, and simultaneously being introduced to Fruity Loops by his neighbor, Youceff started making his own beats.

While a student at Metro Arts, Youceff dabbled in various disciplines including film, theatre, and mixed media visual art. After graduating, Youceff took a year off school and went on in 2009 to study music theory and piano performance at Phoenix College, eventually joining the school's concert choir.

Youceff assumed the name YUS in 2010, while recording his debut album "Palms" in his bedroom during the heyday of the chillwave movement. The album was digitally released on Bandcamp on November 21. Music videos for "Ndefitd" and "Girls" were released the following year.

Youceff followed up his debut album with several well-received remixes of artists including James Blake in December 2011, and Chromatics in the summer of 2012. He opened for many national touring acts including Youth Lagoon, Phantogram, Zola Jesus, and I Break Horses.

In August 2012, Youceff founded Manneken Records and released the label's first single, "Nowadays", in October of that same year. It gained notoriety on the internet after world renowned DJ and music journalist Mary Anne Hobbs played it on her XFM show Music:Response.

Almost two years later, Kabal released the single "20 Million". An animated music video he created accompanied the track. On June 23, his anticipated album, "Talisman" was released on vinyl and CD via Bandcamp. He opened for EMA to promote the release. Later that year, he opened for touring acts Zammuto and clipping.

Kabal changed his stage name to his legal name in January 2015 and announced his participation in the 2015 NPR Tiny Desk Contest with the song "Ride For Tide". He later opened for indie band SALES at the Rhythm Room under the new name. On 5 May 2015, he released "Ride For Tide" to Soundcloud. A week later, on May 12, Kabal released his third album "El Yunque" on Bandcamp and uploaded a music video for Ride For Tide to YouTube. On November 11, 2016, Youceff followed up El Yunque with a single called "A Way Out" and toured Arizona with Russian future-opera duo IC3PEAK.

In a change of heart, Youceff changed his name back to YUS and announced the return via social media in July 2018. He announced the rerelease of El Yunque under the YUS moniker in October 2018, and shared an accompanying video for the single "Star Cravin'", directed by Quinton Dominguez, the following day. The album was released on vinyl, CD, and digitally on December 8, 2018.

In support of El Yunque, YUS played shows in Riverside, CA, and Phoenix, AZ in December 2018. In 2019, YUS performed for the 5 year anniversary of Talisman on June 23. On July 12, he opened for Jackie Mendoza at The Love Song Bar in Downtown Los Angeles, his first show within the city limits.

In March 2020, YUS announced an art show for El Yunque, but it was subsequently postponed indefinitely due to the COVID-19 outbreak.

On May 1st 2020, YUS released a single called "Housing Is a Human Right" in support of rent strikes across the United States of America.