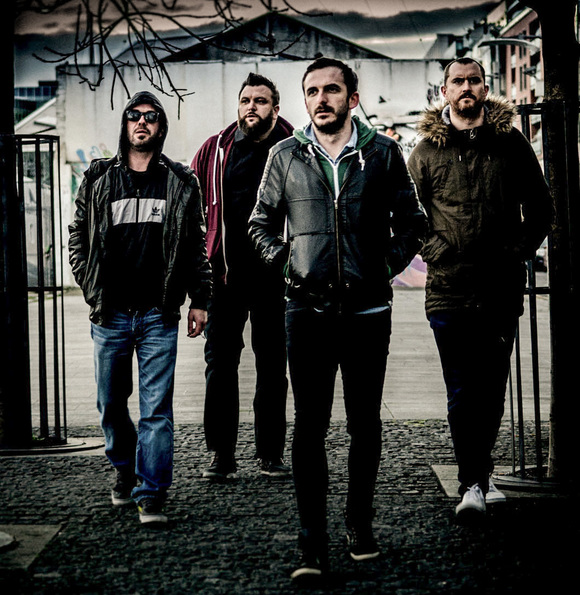 Youth Mass are an Irish four piece post-punk/Alt/Indie band, who have been honing their craft and developing their distinctive sound since forming in 2010.

In 2011 they released their debut EP 'Misanthropy' and their single 'Tony Don’t You Worry' to critical acclaim which received much coveted stamps of approval from influential DJ’s such as Steve Lamacq (BBC Radio), Dan Hegarty (2fm), Paul McCloone (Today FM), Cathal Funge (Phantom FM), John Barker (98FM) and found themselves playlisted with Swedish giants Gimme Indie. The band were also privileged to have their song, Tony Don't You Worry, appear on the sound track of Christian Slater's 2012 motion picture, "Playback".

They released their first album "Morning Run | Evening Sun" in 2014, which debuted at #8 in the Irish Album Charts and #1 in the Irish ITunes Rock Charts, to stellar reviews across the written media and radio alike. The rest of the year was taken up with many festivals including Main stage B&S at Electric Picnic as well as culminating in their first nationwide tour, finishing in Dublin at Christmas after 20 dates, North and South.

They've been tipped for the top by nearly every Irish paper and music mag, and had their music featured on three movies as well as an Irish football show. They have also made their debut on TV, played various festivals as well as finding the time to write and record.

Currently working on their new EP which will be released in April '16, after two new single releases, due in Nov '15 and Feb '16. Also taking bookings now for gigs and tours both in Ireland and overseas in 2016.

Live review by The Herald writing on 24/1/15..."Remember the name: Youth Mass are the real deal. Furious dance-fused rock beats (Old Enough To Know Better is the best track we've heard this year) and atmospheric 80's tinged riffs. Remember when Bloc Party used to be fun, that's Youth Mass; a fully formed, genre busting guitar outfit that, thankfully, remembers how to put on a show"

Debut LP - Morning Run | Evening Sun was released in April 2014. The launch party which was held in Whelans on Wexford Street, Dublin was praised with having the biggest walk in crowd in the past two years by management.

- 2 FM
Album of the week.
Be in no doubt, this is a seriously strong album.

- Dan Hegarty (2FM)
What an album - I nearly ran a red light listening to the first track.

- THE SUNDAY TIMES
Youth Mass show an admirable ambition on their debut album. Aspiring to U2 style stadium anthem heights.

- THE IRISH INDEPENDENT
Insistent guitars from Darren Mullarkey and Neil Nevins, and thunderous rhythm section deliver the goods in remarkable fashion. It's a cracker.

- NEWSTALK
Spectacular - a band that will be a major force to be reckoned with.

- GOLDEN PLEC
Confident in their sound, the drum beats are relentless, and the melodies are utterly gorgeous.

- STATE.IE
Morning Run | Evening Sun is a confident and thrilling step in the right direction for the band.
Strong melodies, driving drums and ambient, crisp guitars are what this band is about.

- MP3HUGGER
a fully realised cinematic work that just bursts with vitality, aided in no small part by some of the best segues you’ll hear this side of ‘Source Tags & Codes'

- U & I MAGAZINE
A strong footing that draws a Radiohead comparison and soaks it up comfortably.
Every sound thrown at this album has it's place and this organisation enhances the composure on show to that proverbial ninthy degree that all bands strive for - 10/10

- THE MUSICIAN.IE
This four piece from Trim specialise in an mishmash of shoegazing and stadium rock seldom heard since Echo and the Bunnymen’s heyday.
Every so often I come across an album that I know I’ll still be listening to in a year, and this has been featuring very heavily in my playlists lately. Walking a tightrope between sonic experimentation and lush pop rock has never seemed so effortless.

‘(Tony Don’t You Worry is) Is a piece of lo fi loveliness and a gem of a track, you’ll uncover a gorgeous sonorous melody and some fabulously warpy guitar, wonderfully weird stuff’ Celina Murphy - Hotpress Magazine

‘I’m getting a certain excited feeling in my gut, post post rock to take your breath away’ mp3hugger

‘I adore the rock music Youth Mass make, with recent single 'Tony Don't You Worry', I'm kind of reminded of 'The Unforgettable Fire' era U2. Only miles better of course.’ 2uibestow Blog

'Youth Mass can make good pop songs which have dirty guitars and screaming vocals, it's when the tempo slows down however on Misanthropy that Youth Mass resemble more than just a garage punk band' - State.ie

'a clever, modern band with an incredible act for writing anthems with huge choruses that belong in arenas, all done with acute precision from a tight as hell act' ON-V Magazine

'a rough diamond... definitely ones to watch, they really will shine' - Hotpress Magazine