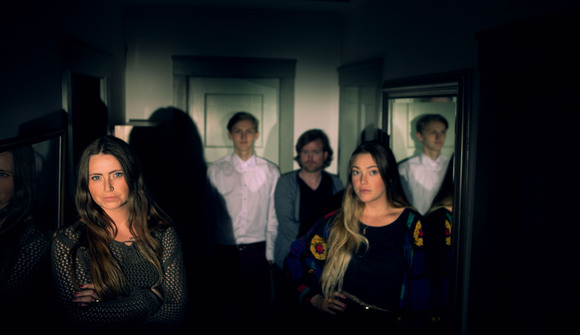 With a common passion for vocal harmonies and love for the acoustic guitar, the two friends embarked on a musical journey. Slide guitarist Smári Tarfur joined Ylja in 2011 and in 2013 they added Maggi Magg on percussion and Valgarð Hrafnsson on bass. Their debut album came out in november of 2012. As of 2013, Ylja stands out as one of the most fresh band to come out of Iceland.

With a common passion for vocal harmonies and love for the acoustic guitar, the two friends embarked on a musical journey – always trying to expand and broaden their sense for creativity.

Things took off immediately and Ylja was asked to do shows all over Iceland. As a couple of years passed, the duet was gaining live experience by the handful.

Icelandic slide-guitarist Smári Tarfur joined the band in the fall of 2011 and, led by the strong creative vision of the two girls, Ylja’s sound expanded even more. With their dreamy vocal melodies, tasteful guitar riffs accompanied by Smári's unique lap-style slide playing - Ylja's sound was born!

More opportunities came to pass. Four consecutive Iceland Airwaves Festivals, the annual Bræðslan Festival in the incredible East Fjords, gigs with Grammy Award winner Glen Hansard and a concert for the Icelandic President made Ylja one of the most exciting live acts of the cold country up North.

Their debut album, simply called Ylja, was released in November of 2012 – which caused a nice stir in Iceland and the bands popularity kept growing. Ylja was nominated for an Icelandic Music Award as the best newcomer in 2013. Early in the summer of 2013 bass player Valgarð Hrafnsson and drummer Maggi Magg joined the band.

As of 2013, Ylja stands out as one of the most fresh band to come out of Iceland. As one of the reviewer stated: "I'll be lost in this album for days."