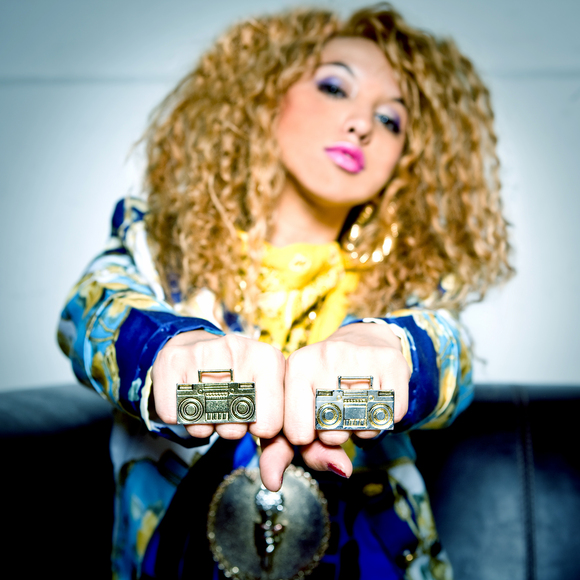 With a traveller's sense of cosmic consciousness this Latin American Swede has spent her recent years between London and NYC embracing and perfecting her sound.

Previously signed to Ninja Tune, and with 2 world tours under her belt, she is now enjoying Berlin as an inspirational platform for her new projects.

In a time where music has evolved to exist largely as a monster moneymaking
machine and a shallow showcase for stripped-off sex- kittens, there
stands a young lady willing to show the world it’s all about the heart.
This ever-loving soul perpetually radiates a defiant intelligence, acute political
awareness and a world-traveller’s sense of cosmic consciousness while
simultaneously exuding the streetwise cool of the neighbourhood girl we all
secretly wanna kick it with.
Yarah Bravo doesn’t want to churn out meaningless messages and she
knows that it would just be too boring swimming in the mainstream. So she’s
created her own flow for the world to know.
Ever heard of the saying "Don't sleep”, well this lady took it literally. She books
a lot of her own shows, runs her own label, designs her own clothes, makes
her own videos, records her own vocals, makes her own flyers, hosts her own
parties, promotes herself (and fellow artists) through the social networks. and
styles and models for different street wear brands.
She ventured into fashion professionaly with her successful Pop Up Boutique -
"Captain Love Bubble" in east Londons trendy Shoreditch in 2011
When she takes to the stage, she performs with a sense of heartfelt urgency,
conviction, and youthful energy, she captivates even the most listless crowd.
With more than 4 languages under her belt, rap and poetry became her way
of expression. Growing up in Sweden as a child of Chilean and Brazilian
freedom fighters, once she was old enough to travel she left for NYC and
London... SHE grew up to become a true renaissance woman with a purpose.
While others continue pumping pollution into the airwaves, Yarah Bravo
would rather challenge you with a breath of fresh air.
She is the founding member of London's super-group One Self (Ninja Tune
Records) and the front woman of Dj Vadims - The Soundcatcher
Soundsystem (BBE), blessed with an aphrodisiac voice that was born to be
broadcast. This charismatic and openly honest MC enjoys what she's does so
much, it's impossible not to love it too….
After very recent collaborations with Nightmares on Wax (warp) , Organized
Threat (L.A), A state Of Mind (Wax Tailor), Xewin (switzerland) etc
And a stint at the Red Bull Music Academy in spain. She is back to the stage
with new material, as well as previously released favourites…
Remember…this is the girl who has shared stages with everyone from Wu
Tang Clan, Public Enemy to Fat Freddys Drop and Asian Dub
Foundation…. Nuff Said!!

PRESS QUOTES:
“In the words of Eric B and Rakim - "It ain't no joke". Super individualistic piece
of futuristic psychedelic Hip Hop soul” DJ
"The ridiculously cool Yarah Bravo will be on everyone's lips sooner or later"
MTV
"Yarah swaggers with an irrepressible confidence that would charm the
coldest of Hip Hop headz. Her cheeky beauty doesn't hurt, but really it is her
ability to connect with the audience that impresses most" HIP HOP
CONNECTION
"The real attraction of One Self is Yarah Bravo. Her voice is rich and deep,
tangy and sweet. By turns she is fearless femme cee, jazz poet and sultry
seductress. Like all great vocalists, notes not words are her primary tools for
communication. On her lips a shopping list would sound profound and
moving" BBC
"Yarah Bravo, a feisty, sharp, young woman blessed with that soul power
voice, amazing stage presence rapping, singing, rhyming with intellect and
jazzual spirit in her voice" Straight No Chaser
"It’s very experimental, infectiously soulful while having the quirks and perks of
quality hip-hop" In The Mix
"If the music industry was true and just, and not the poisoned and corrupt
industry bound to the brain washed tastes of the mindless majority then she
would be a number one hit record" Soul Generation