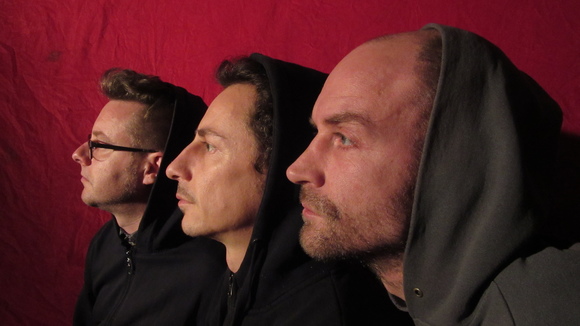 X.A.CUTE is the combined forces of Berlin musician, producer, DJ and writer Freak Ass E (also operating as Sun Ra Bullock and Wolfgang Noise) and the human sound machine and ingenious mixmaster Wuzi Khan, a legend on his own in the Berlin D&B scene, who has performed and recorded with everyone from his own cult rap band 12Dingo to Modeselektor, Enduser, Aaron Spectre, Housemeister, DJ Scud and The Panacea.

Since spring 2014 Mr.MPC Guvi Bosch joined X.A.CUTE and as a trio or with the help of a family of urban renegades they played up and down Berlin clubs and festivals in Germany, Sweden, Poland, Belgium and in the process recorded a series of vocals and dubs that challenge expections and generic boundaries with every next break while still working well on the dancefloor.

„Survival of the Vinyl“ feat. Mike Ladd made it into several playlists (including Dick "Different Drummer" Whittingham's). An edit of that jazz-savvy piece of poetry with the beautiful guitar of Rico Repotente ended up on April 08s issue of The Wire Tapper, before being released as a full director's cut on UK label anorakism this winter. Other songs on the EP include „Empire“ feat. MC Wuzi Khan a heavy punk'n'bass roller that became the first ever d'n'b tune to be heard on Fin „Fink“ Greenalls Future Rock'n'Roll Show on Juice FM Bristol. X.A.CUTE's Re-Riddiming of Ari Up's „Me Done“ can be heard on the King Size Dub 15th anniversary compilation (Echo Beach), and is still a sure shot in any selection. In the meantime, „Head in Noose“ with US Rappers Non & Dream of Shadowhuntaz received several remixes from all over the world, to be released soon on Mesk Records. Remixers include Kouhei, Michael Fakesch, Two Fingers, and Himoru Yoshiteru, who added his version on his own album Here and There (TangramDisk 2007).

The actual X.A.CUTE release Shards (2016) is to be found on xacute.bandcamp.com. Other ongoing X.A.C. studio collaborations include Miss Red of Red Label and official voice of The Bug (Ninja Tune), Digital_Me of Kalzone Records, Holzkopf of Attenuation Circuit Canada and Semtex MC of Gyration Records/Pointblank.

2017 the album Ghosts, including collaborations with Mark Stewart of The Pop Group, Infinite Lives of Big Dada Recordings and another Feature of MC Wuzi Khan will be released on vinyl and X.A.Cute will release a 45 with Ethnic Punch themselves.

The one on one collaboration of the Freak & the Wuze began roughly at the same time as the first echoes of a south London sound named dubstep reached Berlin. From the early basement parties of the Freak Camp crew to gatherings such as Camp Tipsy or the bi-weekly Dubstep Standards (hosted by Kinimode, Sleepwaker and No Breakfast), X.A.CUTE has repeatedly touched base with the Berlin dubstep movers and shakers, sharing the stage with the Freak Camp Allstars, 2Krazy, Bossi, Jade Monkey, Robotik, Jamie Vex'd and others, while the amount of Planet Mu, Hyperdub and Dub Police material in their own DJ sets steadiliy rose. As DJs and X.A.Cutors of their own material, chopped up and remixed live with MPC, sound generators, fx units and mixing desk, they also opened for Mark Stewart & The Maffia and Spectre & Sensational (Word Sound Bass Terror). They regularly clash with friends as the Cargo Cult Crew, Dubstep Standards, Dead Styles, Small But Hard, Shlomp, Dub Serenity, Bossi, Caro Snatch & the Rare as Green Dog Movement from Manchester as well as the Anorakism Connection in Leeds.