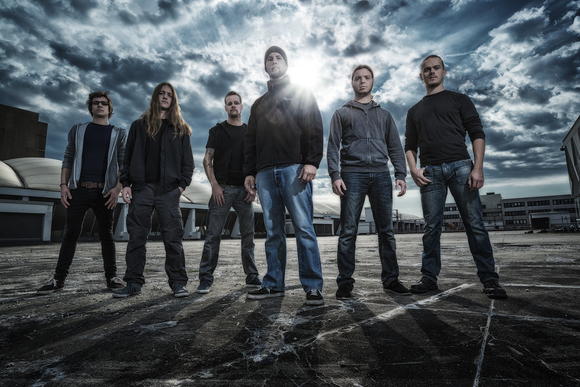 WORDS OF FAREWELL are among the most talented new metal acts that have emerged in Germany in recent years.

With their sense for catchy melodies and technical skills, the sextet has repeatedly proven their qualities, which appeal to a broad audience in the metal scene. After the highly acclaimed debut album "Immersion", the second album “The Black Wild Yonder", which is on the same level as the debut and shows the bands ability to further develop their own style, they are currently preparing their third effort. A release of the yet
untitled third long-player is planned for the second half of 2016. In the meantime WORDS OF FAREWELL want to extend their live activities in order to contribute to an active expansion of their ever-growing fan base.

After being founded in Marl (North Rhine-Westphalia) in 2007, the first EP "Ashes of the Coming Dawn" already shows that WORDS OF FAREWELL consists of musicians who have the necessary know-how for high quality metal and also simply enjoy making music. Their musical roots can be found in the melodic death metal, the genre once emerged in Gothenburg, Sweden. WORDS OF FAREWELL are able to refine this sound in their songs skillfully, adding
progressive edges to already varied sound. One of their strengths is the ability to write atmospheric and versatile songs that appeal to a wide range of audiences. Thus it is no surprise that the 500 units of their debut EP were sold out fast. In autumn 2008, the 4-track EP "FromNow On ..." was self-released and introduced the band to an even wider audience. The track "In Fiction" was featured on the second volume of the "European Underground Extreme Metal Front" sampler.

After that, the band focused on composing their debut album. In the second half of 2010 WORDS OF FAREWELL entered the Metallurgy Studios to record "Immersion". Upon completion the song "Sorae" was released on various internet platforms, leading to increased awareness and praise from fans and critics alike. It was this song that also brought the band to the attention of AFMRecords, a label based in Hamburg, with whom WORDS OF FAREWELL
signed a contract summer 2011. In early 2012 "Immersion" was finally released worldwide. Numerous national as well as international reviews in the relevant Metal media granted excellent ratings and praise for the debut. 2014 then saw the release of "The Black Wild Yonder" - a more than worthy successor, which presented the band stylistically confident and underlined their own identity, yet advancing their style developed on "Immersion" - further
improving the individual musicianship and in general the complexity of the songs. The third album "A Quiet World" was released in November 2016 and further establishes WORDS OF FAREWELL as an essential part of the younger German metal scene.

Ever-increasing live performances also prove the abilities and growing expertise of the band. Concerts of WORDS OF FAREWELL come with an energetic live atmosphere, which captivates the audience. So far they have played several concerts as direct support for the likes of SCAR SYMMETRY and DARK TRANQUILLITY and at various festivals (including Rock Harz Open Air,
Dong Open Air, Winternachtstraum Festival, All Metal Festival, Rage Against Racism, Steel Meets Steel) with more to come!