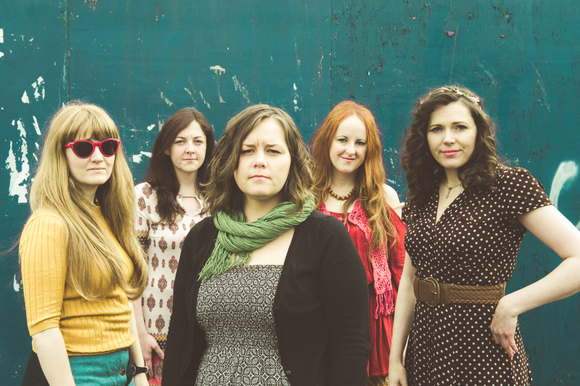 Wookalily are quirky, in a good way.

Folk-gothic troubadour tales, new-time mountain music, glorious melodic hooks and a drum kit which guarantees purists cover their ears. Five women (Adele, Sharon, Lyndsay, Lou and Clair): too girly to be a beat group, too funky to be a folk group, too good to miss.

Wookalily released their debut EP Black Magic Doll in 2011. Their song ‘Diamonds And Gold’ gained them a showcase at the prestigious IBMA WOB Festival, Nashville 2012. They recorded for Country Music Hall-Of-Famer Dixie Hall’s Pickin’ Like A Girl compilation in 2013 – the only non-American band to do so. Their own debut album All The Waiting While was released in November 2014. It’s rumbling along nicely with lots of airplay and humbling acclaim from fellow musicians worldwide. In 2016 they were scouted by Warner Bros Wall to Wall Productions for a BBC4 documentary featuring Midge Ure and Rhod Gilbert. They have opened stages for the likes of Martha Wainwright and Bap Kennedy and are currently recording their second album with much sought after producer Julie McLarnon at Analogue Catalogue. Due for release early 2018.

Lyndsay Crothers is a vocalist combining Sandy Denny soul and Janis Joplin power; Adele Ingram’s songs are redolent of Arlo Guthrie and Chris Smither in their gentle melange of whimsy, and melodies which linger in the mind; Sharon Morgan plays lead guitar, banjo, bass and is responsible for designing and painting the cover of the bands debut album – now the visual embodiment of all things Wookalily. Cardiff Lou Potter keeps the beat time after time with her John Bonham meets Animal from The Muppets handy work on drums. Last but not least Clair McGreevy hammers out her trad laced Irish wiles on lead guitar, fiddle, flute, concertina, bouzouki and mandolin. All 5 of these women together create an almighty force. May the Wook be with you!