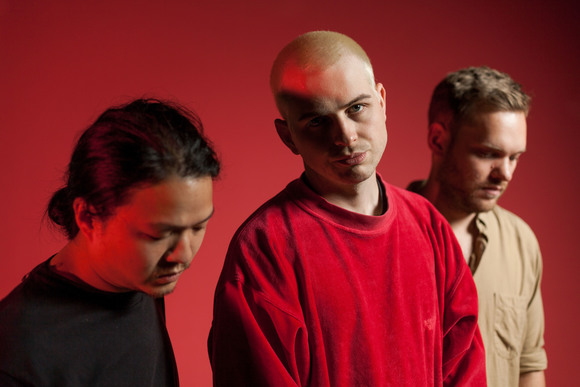 WOMAN prefer to ask questions, one of them being “Where you gonna go when the planet erupts?” which is the frst line of Dust, the opening song of HAPPY FREEDOM, the frst album of the Cologne trio. Think about it: Where will you go when our blue planet fnally bursts? If you are able come up with a simple answer, go ahead ... Either way, you witness the album is taking of lyrically within seconds. And the music is powerful as well. The beat marches elegantly into the sky the keyboards contouring the sonic space as strange sounds emit from the dark. “Is there something greater than dust?”, a voice asks. Sure, you might think: this is cosmic electronic pop music!

HAPPY FREEDOM is a highly anticipated debut album. You can read lines like this in every second info sheet. But with WOMAN it is actually true. For fve years there has been rumbling about his band. Those who knew the band from the beginning passed on their experience like a cherished secret. The band's story began in 2012 in a basement bar in the Belgian quarter of Cologne. The three local musicians did not even have a band name back then, but their frst set stood like a rock. It was loud and chaotic, half Einstürzende Neubauten, half Suicide. Those present just could not believe what they saw: conceptually, they were still in their children's shoes, but the intensity of the music and the joy of experimenting took everyone out of their shoes.

With a few more gigs, WOMAN continued to develop. The band sounded electronic and cosmic, funky and psychedelic. Yet a frst attempt to record the songs failed. “Our goals were much too high back then”, says Manuel Tran, guitarist, singer and keyboarder. “So we just dropped the songs. It was hurtful, but it was a necessary decision ”adds Milan Jacobi, the drummer. Carlos Hufschlag, second keyboarder and second singer, became an important new addition to WOMAN. “At the moment I joined, it could have been over quickly” he remembers. The band stood on the very tip founder Marvin Horsch leaving the group. But the remaining trio just did the right thing: they took their time. They created demos on their laptops, which were translated into analogue music later. It quickly became clear that a WOMAN album just cannot be recorded in a kitchen of a fat share. The music needs space, it requires advanced recording technology as well as a demanding producer.

This amazing person lives in Vienna, his name is Zebo Adam and he is responsible for the amazing sound of the band. With him, WOMAN recorded their frst EP Fever, which was released in the spring of 2016 and dropped like a bomb: music as mysterious, sexy and clever was rarely heard until then. In the summer and autumn of 2016 things went crazy: the band played festivals such as Haldern, Roosevelt/ Marius Lauber recorded a remix of Touch, which took WOMAN to the playlist of BBC Radio1. Finally, 1Live-music- connaisseur Klaus Fiehe told his audience that no other new band was talked about as often as WOMAN at the music industry festival Eurosonic Noorderslag in Groningen– and the guys from Cologne weren't even present. They had something diferent to do: they had to fnish their debut album. In Vienna of course, with Zebo Adam.

Now you have to understand that this madman producer does not record songs as a tax auditors fles tax returns. Zebo Adam is - in the best sense – an uber-nerd. “If he and his technicians set up a microphone to record a drum sound, they turn it into a science”, tells Milan. For several weeks, the band joined Adam in his very ivory tower in Vienna. “Actually, almost no one takes so much efort these days”, says Carlos. This valuable work is expensive of course, and decent recordings can also be made signifcantly cheaper on a laptop with a software such as Ableton live. “But we were not going for a decent sound. This was simply out of the question for us”, says a determined Manu.

The artwork of HAPPY FREEDOM shows a sliced up planet earth, the planet's core is a mirror ball. No image could ft better for WOMAN as a band. Their songs describe our lives - and while we wonder about the clever descriptions, we are able to dance to them as well. Marvelous City is the frst single, a circular piece, almost like a mantra: “There's a marvelous city in my dreams/ You should go downtown if you know what I mean.” You might think there is a very special place you long to be. But a moment later Carlos sings: “Only it's a dystopy”. Memories of the great science fction flms of the 70s pop up, such as “Logan's Run”, giving the viewer a riddle to solve: What do you really want? And what are you ready pay for the bait?

In Concrete Jungle, we witness a city being built in front of our eyes, turned into a concrete jungle, populated by people with fragmented identities – but there is still hope: “I know the sunshine comes through”. The piece pulsates mysteriously and exotic, Carlos sings the verses with a strange voice, raising it in the chorus as Manu plays a psychedelic funk guitar. Control has disco beats and Neo-R'n'B keyboards, the band is coming up with one of their great questions which we can ponder about for hours: “What if control is an illusion after all?” Love starts of like Muzak, with a beat straight from an elevator. But it does not get as comfortable as it is supposed to be, there is space for a few showstoppers in the course of the three minutes. An overdriven electric guitar bursts into the picture, the chorus with a very special fat keyboard is played only once, yet the second passage sounds as if Stevie Wonder had just passed through Vienna.

These are the frst fve tracks of the album. It is useful to get HAPPY FREEDOM on vinyl, because you can turn the record over at this instant and discover “The Dark Side Of WOMAN”. Money describing capitalism as a fascist system, the sirens howling, the beat stumbling, Manu plays a sensational guitar solo, representing the last outcry of the individual. Khung Bo is the Vietnamese expression for terror; this is Manu's home country. Once again a man is resisting, this time the big enemy is the fear that paralyzes civil society in times of terror. “Many pop and electronic music records lack a statement these days”, Carlos complains. “I do not understand how a musician can omit these issues during the tough times we live in”, adds Manu. The fnal song The End comes to a halt a couple of times in the course of its six minutes, as if Sisyphus fnally understands the meaninglessness of his actions. With the lines “Take notice of the wonders / I feel love again” the song rises to the end, at the top of mount Olympus it takes of to a space station in place far away somewhere in our galaxy.
The End is the end and it’s time to return to the initial question: “Where you gonna go when the planet erupts?” Well, right there – to the space-time continuum of the band WOMAN. The earth's core is a disco ball, but life is not just hedonism and decadence. Without soul, friendship, love and social relationships you are nothing, my dear individual person. WOMAN grant us HAPPY FREEDOM but they have the courage to ask us to do something for it as well, as they deliver the soundtrack for a life in HAPPY FREEDOM.