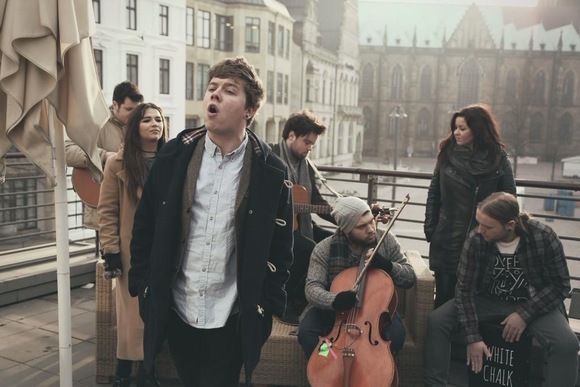 Emerging band White Chalk have certainly been creating a buzz since arriving on the Irish music scene only a year ago.

The seven piece band which is fronted by popular Voice of Ireland finalist Conor Quinn have begun building an army of followers after a phenomenal year which saw them sell out their first headline gig at Dublin’s Sugar Club, top the ITunes album charts with their debut EP and support some of Ireland’s biggest bands such as Kodaline and Keywest in Ireland’s most prestigious music venues.

White Chalk was formed after talented singer/songwriter Conor Quinn held auditions to find his band after spending two year writing beautiful, heartfelt music following his Voice of Ireland success. The band is an eclectic mix of some of Ireland’s finest young talent. They use an impressive array of instruments such as guitar, cello, keyboards, drums, mandolin and bass. Their full sound compliments their impressive five part harmonies and the unique vocal tone of lead singer Conor Quinn.

After working with two top producers; Tom Fuller who worked with the legendary Amy Winehouse and Philip Magee who has worked with Kodaline and The Script, the band released their debut EP “Golden Kids” which shot into the ITunes album charts at number one. The EP received critical acclaim with Golden Plec describing it as “effortless and infectious pop with a warm glow that makes it made for radio”.

Following the success of their debut EP, the band were invited to play at Electric Picnic, Ireland’s most respected music festival. The Musical Director of Electric Picnic was extremely impressed by their performance and confirmed that he would love the band to return.

2014 looks to be a busy year for the talented young named. Their new EP is expected to be released over the coming months and hype has already begun to generate from fans and critics alike. White Chalk plan to hit the festival circuit hard this year and have already been confirmed to perform at numerous music festivals including Hype Festival in Longford, Knighthood Festival in Kilbeggan and NewC Fest in Ballymahon house.