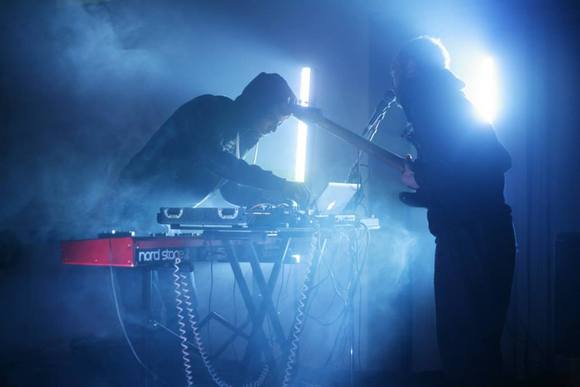 The Electronica of WÆLDER from Berlin and Vienna oscillates between Ambient, Noise and experimental Pop, it scrapes past weird Folk and LoFi and sounds so organic, one can almost hear it breathe.

Their beats and synths build landscapes of rugged cliffs and mossy ground that are teeming and crawling – warm and damp, magical, peculiar and harmonic like life itself. There are bscure samples, voices, field recordings, as well as countless instruments...

WÆLDER work in different places, at different times. They are Jan Preissler from Berlin, handling guitars, bass, mandolin, piano, bagpipes and vocals, and Moritz Nahold from Vienna, classically trained on cello, saxophone and drums but responsible for synths, beats, soundscapes and noises on their album debut “Anachronie”. The two protagonist’s marked musicality is certainly one of the reasons making “Anachronie“ such an effortlessly floating listening experience. They are 23 and 25 years old. They play or have played in orchestras, jazz ensembles, stoner rock and punk bands and work apart from WÆLDER as musicians for theatre and film.

The vocals on “Anachronie“ are fragmented, pitched, layered and looped – deprived of familiar meanings, natural flow of language or even conclusive gender determination. WÆLDER realign them into androgynous- electroid evocations, faintly reminiscent of Tibetan mantras or shamanic healing songs –softly unsettling, hypnotic and embedded with the music just like another instrument. Yet, the vocals do onemore thing to these tracks: they transform the post-dubstep of WÆLDER into electronic pop songs.
“Anachronie“, the album’s title, describes the narration of stories by dissolving the chronology of the process. Withholdingfrom or preponing details or story elements,thereby structuring, filtering, distorting or alienatingthe audience’sperception. It’s a beautiful description of the band’s operating principles.
“Our songs don’t function as narratives“ says Jan Preissler. “The interpretation is supposed to emerge with the listener. Even for the two of us, they have different effects and interpretive scopes.“ Jan associates colors with the songs, such as the accordingly titled “gruen“ (German for ‚green’). Others evoke states such as insomnia and depression. “bruxelles“ samples the breathing of a sleeping band mate in the tourbus. “maoi“, label for the first commercially marketed anti-depressant, conjures nervous states of anxiety in its rumpus beats and contrasts them with tender, fragile sedation phases. Even extremely danceable tracks such as “381“ and “fabel“ are never conventionally arranged or over-produced. They remain airy and weirdly intergrown.
The sounds and melodies of WÆLDER are catchy but queer and just like the vocals, they teeter on the brink between reality and dream, between science and evocation.