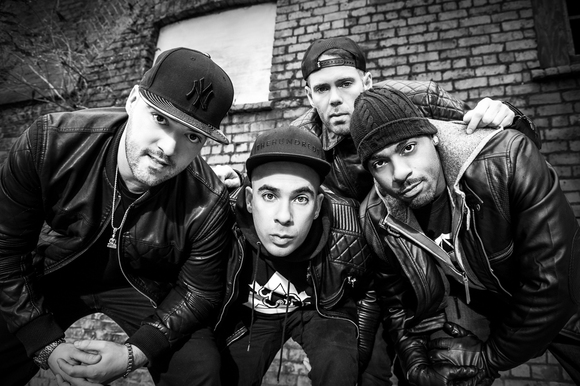 With a cult fan base that has grown exponentially from the council estates and tower blocks of inner-city Manchester to the plush golden Coast of California, Virus certainly earn their title as the “global ambassadors of Dubstep Music”.

Nika D, Goldfinger, JSD and MRK1 began their careers on the infamous Sidewinder Tape
Packs and on the airwaves of London’s premier pirate radio station Rinse FM in 2005. The
hype surrounding Virus Syndicate secured them a two album deal with the internationally
acclaimed Planet Mu Records. Virus went on to release 'The Work Related Illness' in 2006
and 'Sick Pay' in 2008, both of which received critical acclaim from the likes of The
Guardian, NME, The Daily Telegraph and Hip Hop Connection thus creating the demand
for Virus Syndicate.

Virus Syndicate went on to perform at all major European festivals such as Glastonbury
(UK), Sonar (Barcelona) and Roskilde (Denmark) and have supported the likes of Snoop
Dogg, The Game, Kanye West, De La Soul, Cypress Hill and Dizzee Rascal. Further, Virus Syndicate have taken their unique sound to some of the world’s most famous venues such as Fabric, Maida Vale, Ministry of Sound and the Roxy Theatre in Hollywood (LA).

2010 saw Virus Syndicate independently release 'The Breakout Trilogy', which received acclaim
right across the spectrum from DJ Mag and Mix Mag to ATM to Blues & Soul and Q Magazine. Later that year Virus Syndicate embarked on their first U.S Tour on the back of their Dubstep smasher 'Talk to Frank' getting picked up by Snoop Dogg's Cashmere Agency.

'Talk to Frank' was subsequently released on the LA Dubstep Mixtape alongside US Rap
stars EVE, Xzibit and Snoop Dogg himself. The 'Talk to Frank' tour took the boys to Miami,
Detroit, LA and Vegas. Since then Virus Syndicate have gone on to secure regular tours in
the States, supporting Dubstep legends Nero across the East Coast in December 2010
before leading into their own West Coast winter tour in January 2011. Later that year they
toured everywhere between Atlanta to LA on their US Summer tour, further expanding
their already strong American fan base.

2012 sees Virus Syndicate set to take things further, with the launch of their own label, Midication (via Global Dubstep Media Goliaths, AEI) and a series of high profile collaborations and remixes to boot.

The first, “Like This” with Skism, shot to the top spot on Beatport Dubstep Chart, ousting the likes of Skrillex and Knife Party for a number of weeks. The second “Venom”, which sees the collective link up with Mark Instinct, was a quick favourite with club and core DJs from U.S to the U.K, which also topped the Worldwide Beatport Dubstep Chart. Understandably the demand for the Virus has reached fever pitch and has led to U.K, U.S and European tours in the third and fourth quarter of 2012, complimented by more high profile collaborations with the likes of Roksonix (Circus Records), Figure (Circus Records) , Cutline (Speakerbox), Document One (Buygore) and Foreign Beggars (Mau5trap).