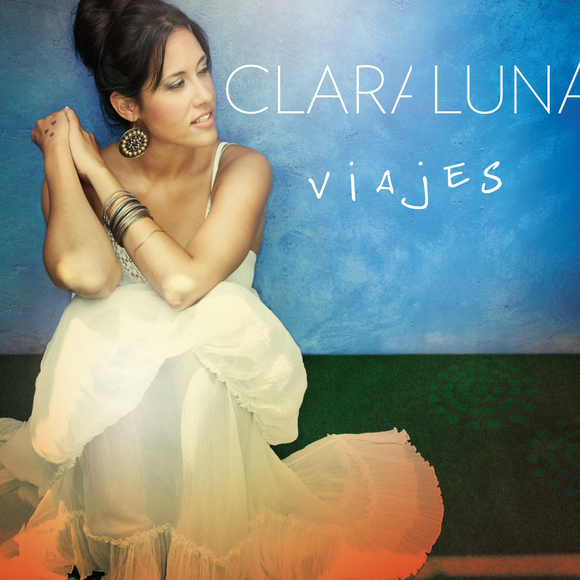 Viajes (Trips) is the new release of Clara Luna, singer from Barcelona.

After recording a first jazz cd with original songs, Lunar Project Supernova; another with Cole Porter’s arrangements, Clara Luna & Xavi Maureta, Coleing Porter; and a last one with contemporary jazz original compositions, Kunveno (with double bass player Javier Moreno), Clara shows her singer-songwriter side in this new project. She offers an original songs compilation inspired by some of her travels, but also covers pieces that have accompanied her in so many more trips. Songs that tell moving stories and bring us to new acoustic landscapes with rhythms such as rumba, tanguillos, chacarera, tango, soul, etc...
It is the vocal jazz essence in an electric context, where pop and rock merge without reservations.

Born in Barcelona (Spain) in 1980, she began her musical carreer stuying classical
piano in the Conservatori Superior Municipal de Música de Barcelona, with Mercè
Molero, Ramón Coll, Ludovica Mosca and Luiz de Moura Castro. Soon after diving into
the world of jazz, she discovers her real instrument, the voice.
She studies with some outstanding teachers like Ana Finger, Viv Manning, Xavi
Maureta and Jorge Rossy, and recieves master classes from Luciana Souza, Claudia
Acuña, Michelle Weir, Dick Oatts, Bruce Barth, Seamus Blake and Bill Steward. During
her stay in New York City, she improves her technical skills with Theo Bleckmann and
Jeannie LoVettri. She has the opportunity to work with Bobby McFerrin in the Jazz
Festival of Barcelona (2002) and with Joan Albert Amargós in the Mediterranian Musics
Festival (2005).
Clara sings for the Taller de Músics Original Jazz Orquestra , with whom she has
participated in the recordings of Cris Juanico’s Vola’m a sa Lluna (2006) and Tot de
mi (2008). She is the leader of Lunar Project with an edited CD (Supernova New
Mood Jazz 2007) of her own compositions that won the best proposal award in 2008 by
Enderrock institution.
Currently, she is co-leader with Albert Vila in a guitar and voice duet playing jazz
standards, bossanova, pop and soul, specifically arranged for this particular format
(Luna & Vila Moments, 2009). Clara Luna is also co-leader with Xavi Maureta in a
quartet called Coleing Porter, which is a tribute to Cole Porter’s music, revisited from
their point of view. They have an edited cd: Clara Luna & Xavi Maureta, Coleing Porter
(Nómada 57, 2010). She is co-leader with Javier Moreno in Kunveno, a project that
was born during her stay in New York City (Des del otro lado, 2012). She is co-leader
of WOM with Gemma Abrié and Laia Fortià, a sincere, daring and compact project that
goes from pop to jazz going through bossa nova and soul. She leads the Clara Luna
Quintet, playing her original compositions with Andreu Zaragoza on guitar, Albert Bover
on piano, Rai Ferrer on bass and Xavi Maureta on drums.